Inventing Language - Some Inspiration and Guidance

David J. Peterson won a competition to design the Dothraki language for Games of Thrones. And then he created two more languages for the show. He also invented Shiväisith for the Marvel blockbuster Thor: The Dark World, and four languages for the SyFy show Defiance.

This interview with him from Popular Science is bite-sized, but fascinating. In How to Invent Sci-Fi Languages, David explains how he starts to invent a language:

I separate the process into three distinct branches: sounds, word meanings, and grammar. I usually start with the sound system, which affects grammar, and also with nouns.


And in this NPR interview for his book, The Art of Language Invention, David says:

There's a very kind of technical part to it, which is creating the grammar, making sure that it works and making sure you've got all your bases covered. It's very much like programming, puzzle-making or problem-solving.

But then there's a very artistic component, which is the creation of the lexicon: deciding exactly how this language you're creating is going to encode the vastness of the world. All languages can say everything. The way that they differ is how they say what they say, and that's what makes language so fascinating.


Pair these with Christina Dalcher, Ph.D.'s Linguistics in Fiction post, especially her 4 Tips for Writing Languages. I particularly liked the one on "Universal Grammar," where she says,

Grammatically speaking, every language has syntactic categories – go ahead, find me a language with no verbs, I dare you! All languages have rules governing the formation of words and sentences, negation, question-making, imperatives, and verb tenses.

...When it comes to spoken languages, each and every one on our big blue planet uses a subset of possible speech sounds; in that subset, you’ll find both vowels and consonants.

The take-home message here? Human languages are a lot more similar than they are different.

There's even a section on Alien Languages.

Go forth and invent, but to paraphrase Tim Gunn on Project Runway, "use your power to invent words thoughtfully."

Or, as this author/illustrator put it so well (and somewhat snarkily), in their "Fiction Rule of Thumb" 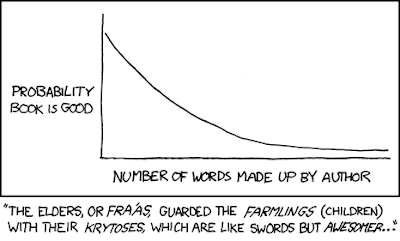