Have you been following the "A Birthday Cake For George Washington" Controversy? 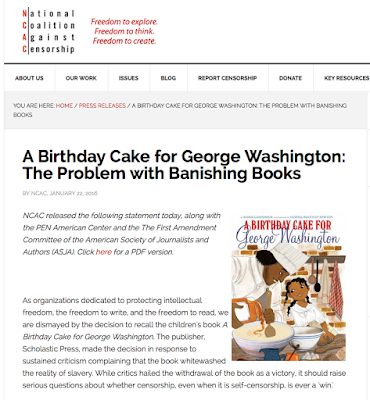 It's also being discussed with the hashtag,


In the aftermath of the controversy regarding how slavery was depicted in the picture book "A Fine Dessert" in the last months of 2015, this story has been unfolding in the past few weeks.

You can read up about it at Betsy Bird's Fuse #8 blog on School Library Journal here, or in the Ron Charles Washington Post article here, or listen to the story on npr here.

The short version? The picture book had a "sanitized" portrayal of slavery, which at first had very little reaction, then a backlash with Scholastic defending the title on January 15, and then two days later announcing they were pulling the title from shelves.


The School Library Journal called the book "highly problematic" and Kirkus Reviews labeled it "an incomplete, even dishonest treatment of slavery." But neither of these critical reviews generated a public response from Scholastic.

It was not until a grassroots campaign by librarians, social justice organizations, #BlackLivesMatter activists, journalists, and others that Scholastic took the extraordinary step of recalling the book.

That January 18th article ran with this image of the book's front and back covers under the banners "Protest Victory: Recalled!" 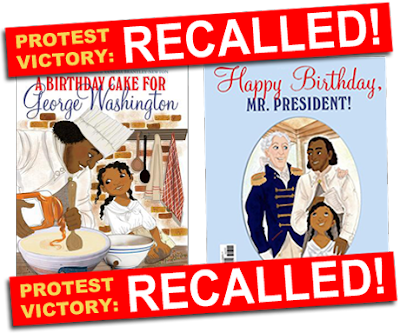 On January 22, the National Coalition Against Censorship chimed in, and their response to Scholastic pulling a book off shelves because it "may give a false impression of the reality of the lives of slaves and therefore should be withdrawn" was fascinating. The NCAC's statement included this:


While it is perfectly valid for critics to dispute a book’s historical accuracy and literary merit, the appropriate response is not to withdraw the volume and deprive readers of a chance to evaluate the book and the controversy for themselves. In the case of A Birthday Cake for George Washington, a book is gone that generated important discussions about how our nation creates, perceives, and perpetuates narratives about slavery and slave ownership.

Those who sought the removal of A Birthday Cake for George Washington and those who acceded to that request should recognize that other books they might consider valuable could be vulnerable to the same fate–censorship in the face of controversy. This outcome is likely to have a chilling effect, leading authors and illustrators to hesitate in taking on racially sensitive or politically controversial topics for fear of public outcry and reprisals. Pulling books out of circulation simply because they cause controversy is the wrong decision.

It's worth considering what are the lessons we can all learn going forward--for authors, illustrators, even for publishers? Because that "chilling effect" of future books avoiding potentially controversial topics (which would certainly include many representations of diversity) is a chilling outcome to consider.

What are some of the lessons you see from this?

I have no problem with Scholastic recalling the book. If that's what they want to do with their own product, so be it. My library chose not to purchase it in the first place. But I find this all fascinating. The grassroots campaign to protest this book included librarians, who are usually against censorship of books and information. I am defending the book, but I'm just interested in the question: is censorship always wrong? I don't know the answer to that. There are some books in my library that I really dislike and hate to see on our shelves. Rush Limbaugh's books for kids fits that category. However, is it up to me to censor them? When one person comes in and complains about a book we take that person's complaint seriously, but probably would not remove it based on the one complaint. However, would I remove something if several people complained? How many is enough to get me to take it off of my shelves? No anwers here - I can't figure it all out. I'm just pondering.

On the issue of A Birthday Cake for George Washington, the SCBWI encourages an open and frank conversation about how our community should approach the issues of diversity, inclusion, self-censorship and the handling of difficult subject matter in children’s books. We did not sign on to the letter from the National Coalition Against Censorship because we see many sides to this issue and would prefer to engage in an open, honest and non-judgmental conversation, to try to explore these delicate and nuanced issues. We do feel that it is crucial to acknowledge that the two creators of this book, Ramin Ganeshram (author) and Vanessa Brantley-Newton (illustrator) and the editor, Andrea Pinkney, have all consistently and courageously supported the idea and reality of diversity in children’s books, and have contributed immensely to our understand of the issues.

As a writer of American history, I applaud Andrea Pinkney's courage in her attempt to portray the highly skilled baking talents of the chef. I feel it was a positive message which could encourage young children enabling them to feel accomplished. The African/Gullah slaves brought a great wealth of knowledge to this New World.

Slavery is a dark shadow on our nation and one which burdens us still as it should. I feel Pinkney intended to send a positive message of encouragement and hope to the younger generation.The skills of the incredible man accompanied by his daughter allowed a little light to be shown.

Many, many Africans brought great skill to this country and without their contribution and influence, America would have failed. The British did not know how to cultivate the rice fields, but the Gullah's certainly did!

I wrote, "Freedom's Secret," which talks of the talents and contributions the Gullah West Africans brought to the South. We should acknowledge slavery as we remember those who suffered, but equally celebrate their contributions.

What a great story of survival. Creating a masterpiece in the midst of such adversity. I salute Pinkney!

Scholastic should not have pulled the book.

Here's an excerpt from Scholastic's January 25th response to the NCAC's statement:

"We acted, not in response to criticism, but entirely and purposefully because this title did not meet our publishing standards for young children in support of our 95-year mission to provide children, at each age level, the appropriate context for them to understand what they were reading. We do not accept the assertion of PEN and NCAC that we should leave a book in circulation which falls short of this mission and could adversely affect children’s understanding of the evils of slavery.

Scholastic owes an apology to the author, illustrator, and editor for not having taken action before the book was published; however, we believe we are correct in withdrawing from circulation a book which, despite earnest efforts, does not adequately present this complex subject matter to the intended age group."

Well gee, I had a lot of thoughts on this post, but Daniel Jose Older's latest contribution to The Guardian sums up just about anything I might have said. http://www.theguardian.com/books/2016/jan/29/smiling-slaves-the-real-censorship-in-childrens-books

"But the free speech advocates haven’t devoted much energy to the alarmingly un-diverse publishing industry and its very real effect on literature. (Pen American, of which I’m a relatively new and usually proud member, has been doing more recently and hosted an excellent series of panels on the subject last year.)

What we’re left with is a palpable sense of selective outrage. Pulling a book because it’s historically inaccurate and carries on the very American tradition of whitewashing slavery is classified as 'censorship', while maintaining an ongoing majority white industry that systematically excludes narratives of color is just business as usual."

The way I see it, what's at stake here is not "avoiding potentially controversial topics," but the acceptance of a false American narrative; that blacks were happy to be enslaved, and their owners were benevolent caretakers and friends. What seems to get glossed over is the real and lasting harm done to black children when we continue this lie. It's telling that children's publishing at large is more concerned with the "censorship" of a book of smiling slaves than it's ever been about opening its doors to marginalized voices. http://blog.leeandlow.com/2016/01/26/where-is-the-diversity-in-publishing-the-2015-diversity-baseline-survey-results/

Instead of defending false narratives, it'd be nice to see more people talking about Don Tate's recently published "Poet: The Remarkable Story of George Moses Horton", a picture book that does not shy away from portraying the reality of slavery, and still celebrates one slave's contributions in a sensitive and positive light.