A Conversation with Laurent Linn - Listen to the Latest SCBWI Podcast Now! 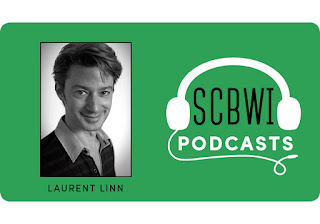 Emmy Award-winning Laurent Linn is the art director for Simon & Schuster Books for Young Readers, and the author illustrator of the YA Novel, “Draw the Line.” Laurent speaks to Theo Baker about the appeal of puppetry, his eleven years working with the Muppets, and the shift in his career path that led him to children’s books. Their conversation also explores cover design, working with new illustrators, how “every book is an experiment,” and much more! 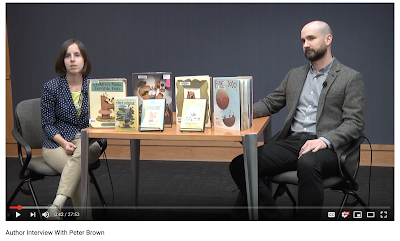 Morgan Reeves sat down with author and illustrator Peter Brown to pick his brain on artistic techniques, writing inspirations, and the world of children's literature.

In this recorded interview from 2017, there's lots of great stuff, including a rundown of what Peter's school visits include, his career path, the vocabulary of comic books, and so much more.

Listen to and watch the full interview here.

How Some Authors Are Using Instagram Stories To Reach Readers

Check out this piece from the BookBub Partners blog, How Authors Use Instagram Stories to Connect with Readers. 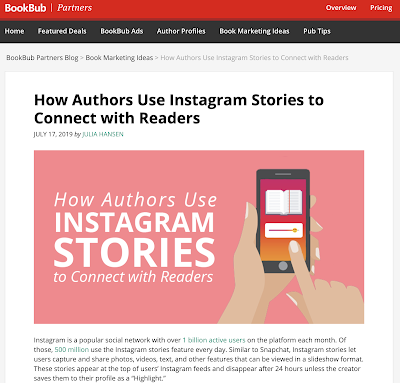 In it, Julia Hansen lists 16 different ways authors are using Instagram stories, along with examples of each.

The one I'm most excited about (and the example was inspiring!) was:

One of the most useful features on Instagram is the ability to save stories to your profile. While most stories disappear after 24 hours, you can choose to have them stay on your profile in a highlight.

Here, author R.S. Grey has a highlight sharing the reading order for her books. This is a useful resource for anyone visiting her profile. 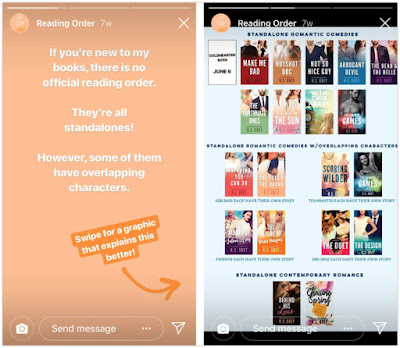 Which ways of using Instagram Stories have you tried, and which are inspirational for you?

Send YOUR Books to Donate via SCBWI's "Books For Readers" Program by July 31, 2019

There is still time to donate so please help make the lives better for the kids in the Madison Reading Project (their 2019 goal is "to provide 40,000 high-quality diverse books and 125 public events with literacy programming and outreach to underserved children in South Central Wisconsin.") and REACH, Inc. (an organization that "promotes literacy for children who are at-risk and homeless throughout Coastal Virginia") with new books written and illustrated by SCBWI PAL members.

You may send 2-6 copies per book written and/or illustrated by PAL members you'd like to donate to this address:

For more information about the program and donating, click here. 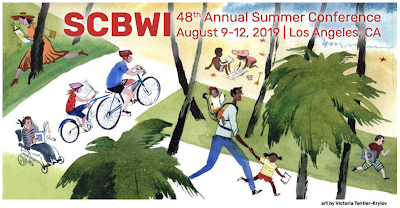 The Panels! (including "Creating Memorable Main Characters for a Book Series," "Agent Panel: Trends and Evergreens: Selling Your Book in Today's Market," "Publishing Options in 2019," "Birth of a Picture Book," "Creating Books That Matter," and "Editor Panel: What Speaks To Me In The Books I Acquire.")

The Agents! The Editors!

The Portfolio Showcase! The Manuscript Critiques!

There's so much more, and I'm practically running out of exclamation points...

Gift yourself all the Information, Inspiration, Opportunity, and Community of the 2019 SCBWI Summer Conference. Get all the details here. Early Registration ends tomorrow (Wednesday July 17, 2019.)

We hope to see you there! 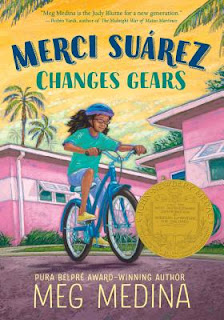 She received the award and gave her acceptance speech at a gala dinner celebration on Sunday June 23, 2019. 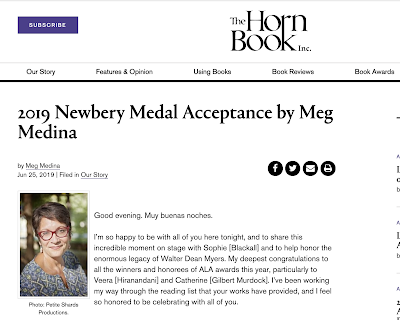 Meg's speech was lovely, and personal, and universal, speaking of her own life (with the stories of her bike history) and sharing what she hoped to accomplish through the creation of this fictional bike, crafting:

“...a novel with a bike as Merci’s first longing, a way to steer herself through the sixth grade and all that awaits her during that wonderful and bewildering year. Merci Suárez and her family are a Cuban clan who live intergenerationally, interconnectedly, in Florida, as my mother dreamed of doing. And they’re a family that sacrifices for each other in large and small ways every day, which is, I think, the most important legacy the elders in my family left me.

And what does Merci find out? Just what I have, I suppose. That life is full of wonderful surprises, like new friends in the sixth grade, and lousy ones; like loneliness and family illnesses. She discovers — as always children will — that happiness and heartbreak coexist in a life well lived. Sometimes all there is to do is to switch to a different gear and push on, always with the hope of a better day.”

It's quite a speech, and you can read the whole thing here, courtesy of the Horn Book.

Find out more about Meg and her books here.

Introverts Unite (Quietly, and in Your Own Way)! – A Guest Post by Author Chris Tebbetts


Since 2001, when I took my first kidlit writing class with Barbara Seuling (who a lot of SCBWI folks will remember as fondly as I do), I’ve worked on thirty published novels. Of those thirty, twenty-nine have been ghostwritten, work-for-hire, or co-authored. Which is also to say that twenty-nine of my thirty published books have someone else’s name, and not mine, on the copyright page. But more about that in a minute.

I didn’t set out to become a professional co-author. It just kind of happened that way, through a series of unforeseen opportunities and coincidences. It turns out, though, that I like it. A lot. I like how it’s allowed me to write full time. I like the creative synthesis of working with other storytellers. And I really like having high-profile partners who take care of the marketing and promotion end of things. For a prototypically introverted writer like me, that’s no small thing.

All of this has afforded me some experiences that go way beyond the hopeful imaginings of my eighteen-years-ago self. The Middle School books I’ve written with James Patterson have sold millions of copies and been made into a movie. I also got to write two trilogies with Jeff Probst, the host of my honest-to-god favorite T.V. show of all time.

So yeah, no complaints.

But what I’ve never done—until now—is publish a book in the usual way: written on spec, sold through my agent, and with full ownership of the copyright at the end of the day.

That new book is a YA novel called Me, Myself, and Him, out July 9. 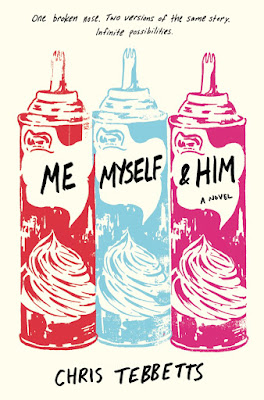 It’s a “Sliding Doors” story with parallel narratives that follow my 18-year-old protagonist through two different outcomes from the same inciting incident (an autobiographically drawn episode in which my character breaks his nose huffing whippets behind the ice cream store where he works). The story is one part memoir, a lot of parts fiction, and also the most personal thing I’ve ever written, by far.

That seems appropriate, too, since this is the first time I’m stepping out as a solo act, and, by extension, as the person in charge of selling my own work to its prospective audience. It’s been a whole new experience with a steep learning curve—not just about the business end of publishing, but also in terms of the emotional rigors of doing such a thing.

There’s a kind of cruel joke in the world of publishing. This is an industry that attracts some large number of people (like me) who thrive on working in quiet isolation, only to then ask them to turn around and shout “LOOK AT ME!” in the most convincing voice possible when it comes time to share that same work with the world. It tends to bring up an insecurity or two. Or three.

I’ve never needed skin so thick before. Never grappled with the kind of loin-girding that this level of self-promotion requires. And what’s more, I find myself feeling envious of other writers in a whole new way. I obsess about the things my publisher is (and isn’t) doing to promote the book. And I’m constantly measuring my own highs and lows against whatever it is my colleagues seem to be experiencing with their own 2019 releases. (Emphasis on the seems to be, given the slanted reality that is other peoples’ lives on social media.)

Should I even be admitting all of this publicly? Maybe not. As I said, I’m learning as I go. But I also know that talking about it has helped as much as anything. Naming these things out loud has been pretty good at taking away some of their power. It’s also come to show me how much I’m not alone in all of this anxiety.

The more I talk with other authors about this subject—the nasty grip of social anxiety in the face of self-promotion; the impossible odds of breaking through the white noise; the “who am I?” sting of impostor syndrome—the more I realize that it’s one of the most common themes in the lives of writers. None of that awareness takes away the stress, per se, but there is certainly something to be gained from recognizing it as a shared experience. (And tangentially, let me recommend this article from the Guardian, Everyone is totally just winging it, all the time.)

The good news is, we’re in the business of shining lights into dark places. We have a unique obligation to our audience, to offer some hope where it’s needed, and to show our readers how very much not alone they actually are. And that extends to the way we treat each other as well. My non-writer friends are always commenting to me about how cool it is to see all of my kidlit people on social media, cheering each other on, promoting one another’s work, and generally making this a wonderful industry to be a part of.

So, even as I’ve dipped my toe into these new waters, and even as I’ve found it to be distressingly chilly at times, I’ve also come to realize that if I raise my head and look around once in a while, I’ll find that I’m not swimming alone.

Find out more about Chris and his debut solo YA novel, Me, Myself, and Him at this website.

Sophie Blackall won the 2019 Caldecott Medal for Hello, Lighthouse. (Her second time winning this highest honor for illustration of a children's book!) She gave her acceptance speech at a gala dinner on Sunday June 23, 2019. 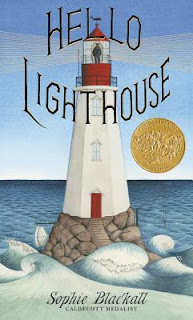 It was a wonderful speech—interesting, profound, inspiring, and ultimately had the entire room of hundreds of librarians and children's book industry folk (including me) leaping to our feet to give her a standing ovation.


Kids are smart. Girls can do anything. We can all be beacons.

Go read the entire speech here at The Horn Book. It's well-worth it!

Author Website Criteria - How Does Your Site Measure Up? 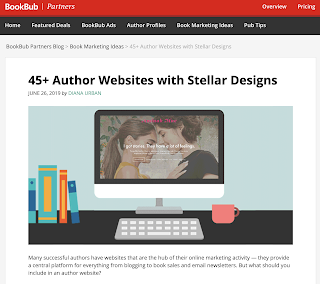 This excellent article by Diana Urban over at the BookBub Partners blog, 45+ Author Websites with Stellar Designs, includes the list of ten criteria that were used in choosing the author websites they would feature:

It's great to see what the more than forty authors featured did, and, just as important, we get to take an inventory of our own author websites.

Read the full article and see all the examples of excellent author websites here.