The Elevator Pitch (Or: The Mortifying Ordeal of Being Known)

If there's anything I've noticed, it's the extreme love/hate relationship authors have with the elevator pitch. In the words of my favorite tag on AO3, #themortifyingordealofbeingknown. There's something... absolutely terrifying about talking about something you made to strangers, something that hits different than writing up the summaries. A lot of the folks I've talked to don't even think about the elevator pitch until they're asked for one (virtual event greenrooms are the ultimate procrastinators' playground).

So I figured "hey, I do elevator pitches for other people for a living, maybe I can help" and thus, this madness was born. I spied on my coworkers' interactions with customers and thought deeply about how I approach it and came up with a few ideas I think might help if you're also struggling with formatting an elevator pitch (or if you've stumbled upon this article 10 minutes before a virtual panel).

Part 1: How do I even explain the plot?

Part 2: I think I've got words, how do I put them into people's ears?

On a slightly more serious note, if I've learned anything, it's that people are so much more forgiving than we think they will be. They want to want your books. I think the number of times I've been called a danger to parents' wallets can show that, even if you don't yet believe it yourself. Go forth and be silly and weird on the internet!

Moth Detlaf (they/them) is a bookseller and the social media manager for Books of Wonder in NYC. They can often be found huddled in a corner somewhere surrounded by a palace of queer books for all ages--bonus points if there are dragons involved. Finding the books that make kids of all ages and demographics (including the grown up ones) feel the way they have always felt as a reader is one of their favorite things.

Will the Proposed Merger of Penguin Random House and Simon & Schuster Happen? The Department of Justice Trial Has Begun...

As reported in Publishers Weekly and elsewhere, the trial to block or not block the merger of Penguin Random House with Simon and Schuster has begun. It's expected to last three weeks. 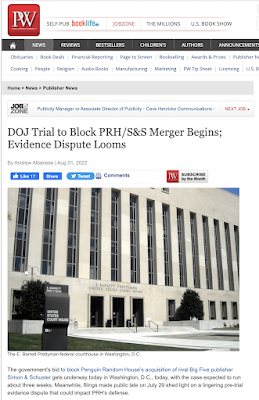 From the PW piece by Andrew Albanese,

“On November 25, 2020 Bertelsmann, the parent company of Penguin Random House, emerged as the winning bidder for Simon & Schuster from ViacomCBS for $2.175 billion. On November 2, 2021, the U.S. Department of Justice sued to block the acquisition.”

The Department of Justice's view is that “Penguin Random House’s proposed acquisition of Simon & Schuster would further entrench the largest publishing giant in the United States (and the world) and give the merged company control of nearly half of the market to acquire anticipated top-selling books from authors.”

The Authors Guild, in a position statement from November 2021, is against the merger, writing, “The proposed merger would enable the merged firm and the few competitors left to pay less and extract more from authors who often work for years at their craft before producing a book. By reducing author pay, the merger would make it harder for authors to earn a living by writing books, which would, in turn, lead to a reduction in the quantity and diversity of books—which subsequently harms consumers.”

“In the States, antitrust challenges often are based on questions of monopolies—companies that become the sole or main providers of certain products or services. But this one is positioned by the Department of Justice as a question of what the government says is a risk of monopsony—in which a company might become the sole or main buyer of certain products or services. The question at its most simplistic level, then, becomes whether a PRH-S&S merger would create a company so large that it would control the vast majority of “top-selling” authors’ payments.”

It's important news to be aware of - will our US Publishing industry go down from a "Big Five" corporate publishers to a "Big Four"? Stay tuned...

Illustrate and Translate and Write On,
Lee