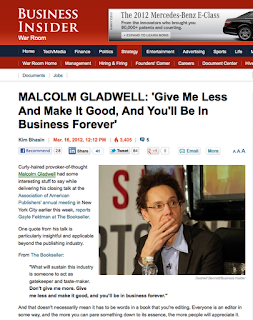 In speaking to the Association of American Publishers last month, bestselling author Malcolm Gladwell made the case that


the world needs great editors, and so does publishing.

"We didn't have too little information [before 9/11], we had too much. We needed an editor...to take what mattered and throw out what didn't matter."


"50 years ago, all you needed was a spy plane. Today you need something much more sophisticated--you need an editor."


As for publishing, "What will sustain this industry is someone to act as gatekeeper and taste-maker."


"An expert's job is to place limits and impose standards" and "it's the editor who is the king.*"


His call to action to the publishers?

"Don't give me more.  Give me less, and make it good, and you'll be in business forever."


*Monarch, in being gender-neutral, would have made me happier than "King."  But Malcolm's point is well taken.  There are so many children's books being put out there - especially with the rise of self-publishing - that quality of the work and vetting of the work have become keys to the future.

Illustrate and Write on,
Lee


Gladwell's speech was reported by Michael Cader for Publisher's Marketplace in an article, "Malcolm Gladwell Celebrates The Editor As "King"', Gayle Feldman at the Bookseller in "AAP: Nothing more important than editing" and by Kim Bhasian at Business Insider war room, "Malcolm Gladwell: "Give Me Less And Make It Good, And You'll Be In Business Forever."
Posted by Lee Wind, M.Ed. at 3:00 AM