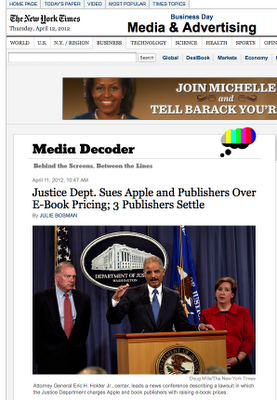 This story is very much in the news.  As the article by Julie Bosman in the New York Times put it:

The Justice Department jumped directly into the fight over the future of digital books on Wednesday — and Amazon came out the winner.


There are lots of reports about this development, how three publishers have settled, what the other two are saying, and what this might mean for e-book pricing.   Among them, you might read:

And Publisher's Marketplace, in their Publishers Lunch newsletter, reports that:

"...the European Commission's parallel investigation of agency ebook price may be close to a settlement among most of the parties involved as well."