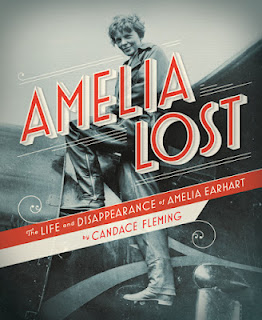 Lee: First, congratulations on winning the 2012 Golden Kite Award for Non Fiction for your Amelia Lost: The Life and Disappearance of Amelia Earhart!

Candace: Thank you. I was thrilled when I heard the news, and I continue to be thrilled. It's amazing!

Lee: So, why Amelia? What drew you to telling her story?

Candace: Here's the story -- during my sophomore year in high school, on our way back from the homecoming dance, my boyfriend of three weeks -- Doug Cougill -- broke up with me. He dumped me for the girl he'd actually spent most of the evening dancing with. So, still wearing my Gunny Sack dress (this was 1978 after all), I flung myself onto the sofa and sobbed out my anguish. Then I waited for my mother to share a similar story from her past, one that would reflect my own emotions; one that would comfort me because it would fulfill that old adage, "misery loves company." Instead my mother told me this unexpected story.... In was July 4, 1937 and my mother -- thirteen at the time -- was listening to the radio when an announcer broke in with stunning news. Amelia Earhart was missing. Enroute from New Guinea to Howland Island, she'd simply vanished. Authorities believed she'd gone down at sea. My mother couldn't believe it. It seemed impossible. Amelia Earhart was the woman who could do anything -- a larger-than-life role model who symbolized endless female possibilities. She couldn't be lost as sea. She just couldn't. Devastated, my mother stumbled down to the beach-- she lived in a small town on the shore of Lake Michigan -- and she stood there in the sand, gazing up into the cloudless blue sky. Watching. Waiting. Willing Amelia home. She was convinced if she stood there long enough, she would eventually see the aviator winging her way home. But the pilot didn't come. And she didn't come. She never came. And even though forty years had passed between that event and my homecoming dance, I could still hear the sadness and longing in my mother's voice. Amelia Earhart had broken my mother's heart. And in turn, she'd broken mine. Let's face it -- broken hearts make for good stories.

Lee: Wow! I love knowing that, and it does seem that Amelia's loss broke hearts across the world. As a reader, there were a lot of surprises in your telling of Amelia’s life and accomplishments... I didn’t know that she learned to fly by taking lessons from another female pilot, or that she didn’t actually pilot the plane the whole time for some of the flights for which she became most famous, or even how she worked at cultivating her own fame. What were the things you learned about Amelia in researching and writing this book that surprised you the most?

Candace: What I found most surprising was the level of mythologizing Amelia did on her own behalf. What I mean is, she told stories about herself --wrote them in her memoirs -- that were totally untrue. She created them out of whole cloth. For example, in her book The Fun Of It she relays this absolutely charming anecdote about her first glimpse of an airplane. It was 1908, she wrote, and a "thing of wire and wood" was giving demonstrations at the Iowa State Fair. But eleven year old Amelia wasn't the least bit interested. She was entirely too taken with "an absurd little hat made of a... peach basket" that she'd bought for fifteen cents. It's a charming story. But it's not true. Aviation history (as well as the Iowa Historical Society) bears that out. And that wasn't the only fib Amelia told. At first, I was frustrated by all the lies. I began telling people I was going to title the book "Flyer, Flyer Pants On Fire." Then I realized that this was an opportunity to get beyond the mythologized Amelia -- a chance to strip away the heroic mask in order to make her a living, breathing woman who did extraordinary things.

Lee: (laughing) I really liked your "Navigating History" preface that encouraged readers to think about just that - the difference between truth and myth. Was there a book proposal phase of selling this project, or did you write the whole thing on spec?

Candace: I'm embarrassed to admit that it was neither. My longtime editor, Anne Schwartz, asked who I wanted to write about next. I gave her two names -- P.T. Barnum and Amelia Earhart. So she offered me a two-book contract, and I got to work.

Lee: Nice! When there’s such an incredible amount of information on a subject – you’re writing about really famous people (Amelia Earhart, Mary Lincoln, P.T. Barnum) who have very much been in the spotlight, and you could probably fill a library with the books and articles written about each of them - how do you not get lost in the research? How do you know when it’s time to stop gathering information and start writing?

Candace: I do get lost in the research. In fact, I WANT to get lost in the research. It's the only way to uncover those overlooked tidbits of truth. I know it's time to write, however, when the story reveals itself. It shows me how it wants to be told. I'm talking about structure here. I never know how I'm going to tell a person's life story until I've done the research. I never impose structure. Instead, I research until I sort of find my way into that person's life. I see the story's shape --be it a scrapbook, or a more traditional chronology, or two juxtaposing stories. That's when I know I'm ready to write.

Lee: That's a fascinating way to approach it - to want to get lost in the research! Can you tell us more about how you played with organizing the structure of the dual narrative in Amelia Lost: the search for Amelia on the one hand, and her childhood through that last fateful flight on the other? Did you use index cards, or special software?

Candace: No notecards, or special software, just wide-lined, loose leaf notebook paper. It's what I write all my first drafts on. As for Amelia's structure, that was dictated by the research. As I delved into her life, I discovered another story -- that incredible and dramatic search. And I began to see how the two stories dovetailed; how Amelia's choices seemed to lead to her fate; how her fate led to her becoming legendary. Once I came to this conclusion, the writing came easily. I didn't write the stories separately, but rather in the order they appear in the book. Sure, I strived for dramatic effect and cliff-hanging endings. But the breaks themselves -- where one story ends and another begins -- followed their own course.

Lee: The sidebars were almost a third storyline, providing background information and context just when the reader needed it. Can you tell us more about how you chose what to explain and how you determined how much detail to go into?

Candace: I've never thought of the sidebars in that way before. A third story? That's such a great thought! For me, sidebars are determined by two questions: 1) Will including this information in the text slow the story down and 2) Is the information just so fascinating that I simply can't leave it behind. If the answer is "yes" to either one of those, then I know I have a sidebar. But I also know they need to be brief, so I try to keep them to two or three paragraphs. I try, but I'm not always successful.

Candace: I shudder as I say this, but I joined SCBWI almost nineteen years ago. That's a long time, huh? At the time I'd published a few magazine pieces, but was really interested in writing books. So I joined SCBWI and a few months later headed off to my very first writer's conference here in Illinois with a picture book manuscript in hand and smashed graham crackers on my skirt (my sons were still really little back then). Oh, gosh, I was so nervous. And yet so hopeful. I'd come to hear the amazing Anne Schwartz (who was editorial director of Apple Soup, her imprint at Knopf, back then) talk about her list. I'd been doing my homework, studying everyone's list and I felt a real kinship with the stuff she was publishing. Anyway, to make a long story short, during an open mic reading, a friend read my manuscript. Anne heard it and liked it. She asked if I would send it to her. I did, and a few weeks later I had my first book contract. Even better, I ended up with an incredible editor, as well as good friend. We've been together ever since -- nineteen years and something like twenty books. Not bad, huh?

Lee: Not bad at all - you're a real SCBWI success story! Hurray! Last question, do you have any advice for other writers working on non fiction projects for kids and teens?

Candy: Think of your piece as a story, not an information piece. After all, we're storytellers, not fact writers. And honestly, there's not much difference between writing fiction and nonfiction. You use the same writing tool box -- three-dimensional characters, evocative settings, dramatic scenes. It's just that the materials are different. Let me explain further. I liken the process to making cake. When baking a fictional cake, you're free to chose any ingredients you want to make a scrumptious dessert that people will gobble up. With nonfiction, you're still expected to create a delicious, gobble-inducing dessert. The only difference is that someone else has chosen the ingredients. You're still expected to create an engrossing story.

Lee: That's lovely! Thanks so much Candy!


For more about Candace and her books, and even a great video where she talks about baking Benjamin Franklin a birthday cake, check out her website here.
Posted by Lee Wind, M.Ed. at 3:00 AM

Thanks for this terrific interview, Lee. I've linked to it in my Interview Wednesday roundup today at our TeachingAuthors blog.