Every year the SCBWI awards one member with The Sid Fleischman Humor Award, for work that "exemplifies excellence in the genre of humor, a category so often overlooked by other award committees in children’s literature." 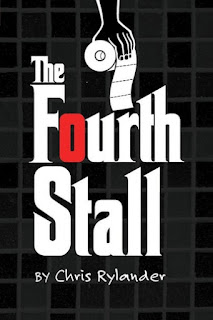 This year's winner is Chris Rylander for his debut middle grade novel, The Fourth Stall.

Lee: Can you tell us about finding out that you'd won?

Chris: Yeah, it was kind of weird in that I hadn't thought about the award lately and it wasn't on my mind at all the day Lin called. But for some bizarre reason as soon as I saw an LA area code on my phone I just had this weird feeling that it might be related to the Sid Fleischman Award. And then when I answered and she said, "This is Lin Oliver..." I was in complete shock. I think she was expecting me to shout and yell, but I was too surprised to say much of anything.

Lee: Is being funny – writing funny – a gift or is it a craft? Are you born with it, or can you develop it?

Chris: I really think that you have to be born with at least part of it... It's really hard to force funny. Most of the time I'm not even trying to be funny, I'm just writing to entertain and amuse myself. But the strange thing is, I usually can't help myself. Whenever I try to write any story more serious in nature, it always reverts back to humor by page two. It's just the way I write, it seems.

Lee: You used different kinds of funny in your book; jokes, absurdity, situational comedy – are you aware of using different comedic tools or do you just write it?

Chris: I have very little awareness at all when I write, if that's okay to admit. I just kind of go and whatever comes out comes out. Sometimes when I go back and reread something for the first time, I'll think, "I wrote that? I don't remember writing that." So, I think all the different forms of humor in my book just happen that way, there's not a lot of deliberation over what type of humor to insert where.

Lee: We (and our kid readers) live in a world where we’re told to see things in black or white. Villains are all bad. Heroes are all good. You went a long way to making your villain, Staples, three dimensional. And there are also moments when your story’s heroes aren’t perfect and do “bad” things... can you talk about those decisions as a writer?

Chris: Well, for a lot of that, I definitely need to give credit to my agent and editor. They both helped me a ton in fleshing out my characters and making them more well-rounded. But that said, yeah, I definitely always strive to have "real" people in my books, at least at their core. A lot of my characters are kind of absurd on the surface or at first glance, but I really think the humor of that absurdity needs to still be grounded with a "real" person underneath. Except for the rare true sociopath, I think everybody does and thinks and feels good and bad things in their lives, so our characters should be no different.

Lee: Writing Middle Grade raises the issue of how involved are the parents going to be – you don’t want them to solve the main character’s problems for them, but it’s also a bit of a cliche to kill them off before the story starts. How do you dance along that line of parent involvement in your writing?

Chris: It was sort of easy for me in The Fourth Stall because I decided right away to structure the school and Mac's business in a way that revolves around a kid-based hierarchy or world. So as much as possible, I wanted all of the kids to be very determined to keep parents and teachers (who play the police role in The Fourth Stall) out of the main conflicts between kids. Of course in The Fourth Stall Part II, I spin that around and teachers and adults suddenly play a much different role, which was kind of fun.

Lee: Without spoilers for those who haven't read the first book, can you tell us a little more about the sequel? 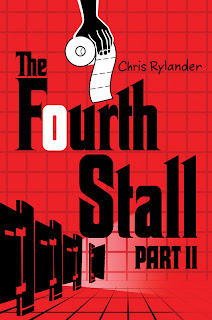 Chris: In the sequel, a girl comes to Mac for help. And he quickly learns that she's not quite what she seems. He can't quite figure out what her angle is. Also, a lot of really weird stuff starts happening at their school and a new principal is brought in and seems to be determined to take down Mac's business.

Lee: Cool. Thanks for that. There’s a big who-done-it element in The Fourth Stall - do you agree with fellow kid lit comedy/mystery author Bruce Hale that “backwards is best when plotting a mystery?”

Chris: Well, that does sound like good advice! I wouldn't even know where to start when advising people on constructing a good mystery. I always applied the old, "If I was a reading this right now, what would shock me the most?" method when figuring out how to keep people guessing. That, and having an amazing editor seemed to do the trick.

Lee: I like that technique - "what would shock me the most?" I'll have to try it! I noticed in the Acknowledgements for The Fourth Stall that you thanked Ruta Sepetys, winner of this year’s Golden Kite Award for Fiction for her debut novel, “Between Shades of Gray” – Do you two have a club for award winning debut authors?

Chris: Ha-ha! Actually, we were both on the precipice of signing with the same agent back in 2007, I think. So that's how we started corresponding. And it's sort of bizarre how we both ended up signing with agents and getting book deals right around the same time. And now we're getting awards in the same year. Strange world.

Lee: When did you join SCBWI and can you tell us how that’s helped you on your journey as an author?

Chris: I joined shortly after I received my first book deal. So I can't say that it helped me get published, but I can say that the wealth of information and support I've found through SCBWI since joining is substantial. It's an amazing way to connect with other writers and illustrators. I spent one year as Regional Advisor of the Dakotas region, and I had the best time talking to other members and writers and artists at our local conferences. It was my favorite part of being RA, meeting other writers.

Lee: Last Question: What’s your best piece of advice for other writers?

Chris: My best piece of advice is to never, ever let rejections get you down. I mean, it's okay to be disappointed, but don't let it destroy your resolve or even ruin your day. Not every book is universally loved, I mean, I've met people who hated the Harry Potter books, and they might be the most beloved series of all time. So just don't let it get you down, you can't force anyone to like your book. Write for yourself first, and consider any publication a bonus. I know that mindset kept me sane.

Lee: Great Advice! Thank you so much, Chris!


To find out more about Chris and his books, visit his website here.
Posted by Lee Wind, M.Ed. at 3:00 AM

Congrats to Chris! Great achievement on a debut novel.