Good News re: Free Speech and Books for Teens

As reported in the Washington Post and by other media, the Virginia lawsuit attempting to stop Barnes and Noble bookstores from selling -- and public school libraries from carrying -- Maia Kobabe’s “Gender Queer” graphic novel-style memoir and Sarah J. Maas’s YA fantasy “A Court of Mist and Fury” has been dismissed. 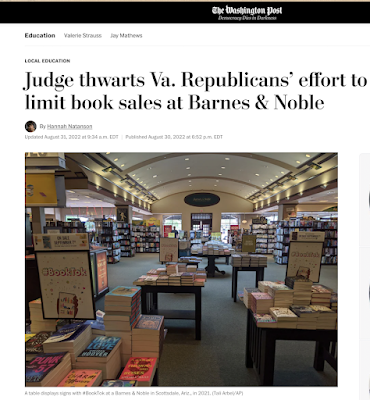 By calling the books "obscene," conservative politicians in Virginia had been trying to use an old state law that would have opened the door for booksellers and librarians to be criminally liable for selling/making the books available to minors.

It was a new tactic by those who want to silence a Queer voice and limit what other people's children can read. And, though the dismissal is news to cheer, the books themselves were not cleared of the obscenity charges - it was the law that was found unconstitutional.

In the ruling, as reported by Hannah Natanson in the Washington Post, Judge Pamela Baskervill

“said the law violates the First Amendment by enabling governmental censorship and by assuming that anyone distributing an obscene book must be consciously deciding to break the law, when in fact these people might ‘have no knowledge that a book may be considered obscene.'”

Book banning is something that can affect all of us creating works for children and teens. Join the fight for the freedom to read at the American Library Association's Unite Against Book Bans website.