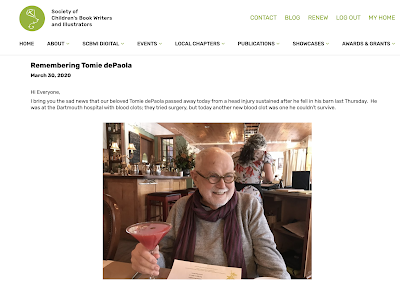 Tomie dePaola passed away at the end of March, 2020.

There have been some beautiful online tributes to him, including this remembrance from SCBWI's Executive Director and Co-Founder Lin Oliver, who writes of their friendship, and of Tomie's contribution to SCBWI:


Tomie’s role in SCBWI was huge. He was an early Board member, and gave one of our first keynote banquet speeches during which he read The Clown of God to a tearful audience. He was a tireless advocate for illustrators, and was the one who insisted we include illustrators in our name (before him, it was the SCBW). He conducted the first master class intensive at the conference. He sponsored the Tomie dePaola award, now called the Narrative Art Award. He spoke at so many conferences, loved our organization and our community. His art was featured on the very first full color Bulletin cover.


and this piece in Publishers Weekly, 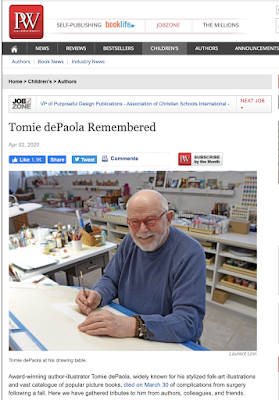 which includes some great memories, including from Author/Illustrator and Art Director Laurent Linn, who wrote,

Tomie was dance and music and color and wit and theater. He crafted all of these elements into his art, layering them in just the right amounts depending on the story, and created books that were beautiful but also spoke to the soul of a child. He understood the minds of children, their desire to discover, their need for respect. While I’ve never known anyone whose laugh resonated as deeply as Tomie’s, he wasn’t all light and sparkle (though he certainly was those!) He was also profound and thoughtful about the peaks and valleys of his life. He had his woes.

But I learned from him and was profoundly inspired by how he got through—no, how he grew—during difficult times. He spoke of being young and gay in the 1940s and 1950s and the blatant discrimination he faced, the horrible losses of family he loved and friends who were his chosen family, and painful low points in his long career. But he always had hope. The last time I spoke with him was on Sunday, March 21. I asked him about the unsettling and unknown times we’re facing today. No offense, I said, but you’ve lived a long time and seen so much. (He laughed and said no offense taken—he’d earned his 85 years!) How did this horrific virus compare to anything he had experienced before? He said it’s nothing like what he has known, but he was hopeful. He spoke of wanting to use this time to look at things differently, to have more compassion for others, to rethink how we live our lives and come out better than we were before. I am devastated that he is gone and still can’t believe it. But as we face the future without him, I shall carry his hope, and his sparkle, with me every day.

Our world is so much better for having had Tomie part of it. And we have his books, still.

Read more about Tomie, and his books. As Lin wrote, "His legacy endures in all ways, big and small."