Short Story and Novella-length E-books as "bridges" between novels, and as a way to introduce readers to an author's world 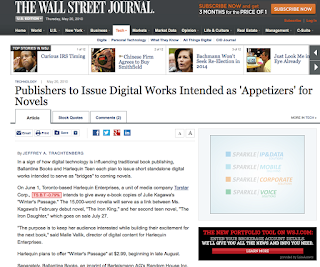 This new approach, as reported in the Wall Street Journal (and covered in Publisher's Lunch last week), is worth noting:

In a sign of how digital technology is influencing traditional book publishing, Ballantine Books and Harlequin Teen each plan to issue short standalone digital works intended to serve as "bridges" to coming novels.

On June 1, Toronto-based Harlequin Enterprises, a unit of media company Torstar Corp... intends to give away e-book copies of Julie Kagawa's "Winter's Passage." The 15,000-word novella will serve as a link between Ms. Kagawa's February debut novel, "The Iron King," and her second teen novel, "The Iron Daughter," which goes on sale July 27.

"The purpose is to keep her audience interested while building their excitement for the next book," said Malle Vallik, director of digital content for Harlequin Enterprises. Harlequin plans to offer "Winter's Passage" at $2.99, beginning in late August.

The idea is that

"...it is a literary appetizer, inexpensive enough to attract potential readers who might otherwise not be willing to buy a new novel from an author whose works they haven't yet read, said Mr. Berry."

"Realistically, it would be hard to get something like this in print," said Matt Schwartz, vice president of digital marketing and strategy for the Random House Publishing Group. "But the e-book format is very flexible. What this does is offer an affordable entry point into Steve's world...It's the equivalent of buying a couple of songs online," he said. "You can read it in 30 minutes."