Mara Rockliff has won the 2013 Golden Kite Award for Picture Book Text for "Me and Momma and Big John." 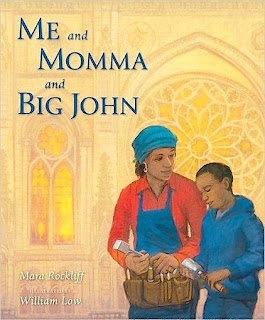 I was able to interview Mara to find out more...

Lee:  Can you tell us about finding out you'd won the 2013 Golden Kite Award for picture book text for "Me and Momma and Big John?"

Mara:  It was a big surprise! The phone rang and it was Lin Oliver, which startled me enough that I babbled a while about SCBWI before she got a chance to say why she had called. I’d already found out about the Charlotte Zolotow honor for Me and Momma and Big John and the Ezra Jack Keats honor for my other recent picture book, My Heart Will Not Sit Down, so it was in the realm of possibility for me that I might be a runner-up again. But when Lin told me I had actually won a Golden Kite, I figured I had heard her wrong. I think I said something witty and brilliant like “Huh?”

Lee:  The arc of little John's understanding of his mother's contribution to building Big John (the Cathedral of Saint John the Divine) gives the story such emotional power. Was this always the narrative line, or did it evolve as you set out to write this story?

Mara:  Actually, it took me a long time to find that central conflict. The story was inspired by a real stonecutter named Carol Hazel, and she’d told me lots of interesting things about her work. For instance, she explained that every stone had to be cut exactly right, down to the smallest fraction of an inch, or else the wall wouldn’t be straight. Cutting her first stone took her two whole months—and when she finished, the master stonecutter threw it on the ground and made her start all over. I tried to write the story around that, and it was terrible. I finally gave up and put it away. Then, around six or eight months later, I pulled it out again and realized what was wrong. The story was supposed to be John’s story, but the conflict was his mother’s, not his own. I had to go back and find a problem from the child’s point of view.

Lee:  That's fascinating - and such a good lesson about finding a problem from the child's point of view.  There's a numinous, magical quality you evoke in the scene where the family visits Big John and "each voice lifts up the next, and then the next, each new one held up higher by the ones that came before. Beside me, Momma's voice joins in the song. I take her hand, and I sing, too." Were you conscious of keeping your language spiritual but not specifically religious?

Mara:  Ha, well, I guess that’s what you get when a lapsed Jew writes a book about an Episcopalian cathedral! I wanted John to have a small epiphany, a moment where he realizes it doesn’t matter that his Momma’s work on the cathedral is anonymous, that just being part of something great and beautiful can be enough. The language was meant to parallel the building of the cathedral—each voice lifting up the next, the way each stone holds up the next. It’s about community…but maybe it is spiritual too.

Lee:  Pacing is so important in a picture book. What techniques do you use to figure out if a manuscript's pacing is working out before you hand it off to an editor and illustrator?

Mara:  I just go by feel. My early drafts always feel “off” to me. Then somewhere around the third or fourth or fifth draft, the story finally snaps into place. (If it ever does—plenty of stories never do.) I know some people like to read their drafts aloud or make a dummy. Sometimes I do page breaks to make sure there are enough different scenes to illustrate, but the page breaks in the finished book never end up where I expect them to.

Lee:  Your author’s note, “About Big John,” is so kid-friendly—can you talk about writing that?

Mara:  I’ve heard complaints about my author’s notes being more interesting than my stories! Author’s notes are fun to write because that’s where I get to stick all the cool facts that didn’t fit into the storyline. Also, I started as a textbook writer, so straight exposition is my native tongue. Sometimes I write the author’s note while I’m still struggling with the main story.

Lee:  When did you first join SCBWI, and can you share how that's helped you on your journey as an author?

Mara:  I joined in fall 2000, after going to a week-long children’s writing workshop led by SCBWI board member Cheryl Zach. I was very glad I did. After reading calls for submissions in Connie Epstein’s “Publisher’s Corner” in the SCBWI newsletter, I sold a beginning reader to Children’s Press and a picture book to a new publisher called Sylvan Dell. Those were my first trade sales, and I’ve stayed with the SCBWI ever since.

Lee:  What's the best piece of advice you've received about your career writing for children that you can share with us?

Thank you so much, Mara!

You can find out more about Mara Rockliff and her books at her website.

If you'd like to see Mara receive her Golden Kite Award and attend her workshop, "Writing the Historical Picture Book," join us at the 2013 SCBWI Summer Conference.  You can find out all the conference information and register here.

Congratulations MARA!!!
Clever interview, Lee !
Thanks especially for
the brilliant insight
on process.