The 2013 Golden Kite Award for Picture Book Illustration goes to K.G. Campbell for his remarkable “Lester’s Dreadful Sweaters,” which he also wrote. 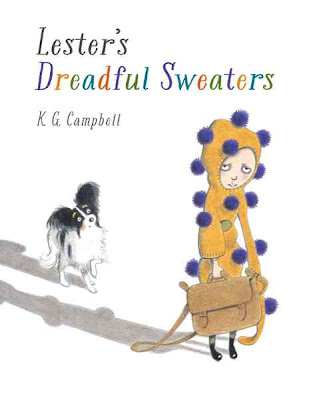 I had the opportunity to talk with K.G. to find out more…

Lee: Congratulations on winning the Golden Kite for illustration!

Lee: Can you tell me about finding out that you’d won?

K.G.: I got a call… basically just out of the blue, saying that I’d won. It’s not something that I would was expecting, at all. It just happened one morning and it was really thrilling. And oddly enough, it happened a day after I found out it had been made an Ezra Jack Keats New Illustrator Honor book as well.

Lee: Something definitely struck a chord with this… it’s sinister and charming all at once. 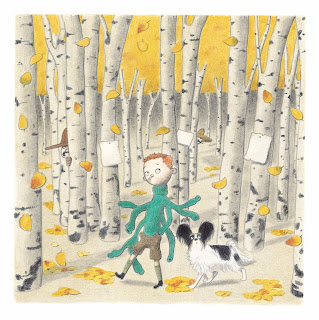 Lee: And I wanted to talk to you about that. People talk a lot about text having a voice, authors having a voice. But there’s a real visual voice to your illustrations. Can you tell us how you found that visual voice for this project?

K.G. There are a number of influences funneling into that. Probably my starting point would be Gorey. And it may not show in the illustrations, but Lisbeth Zwerger is actually a big influence as well – she’s somebody else who combines the gothic with the charming, you wouldn’t think from her talents that her work would be a little dark, but I think psychologically it is. Another name to mention in terms of influence is Peter McCarty, who also works in colored pencil, and I like his style. Karen Powers, Art Director at Kids Can Press, was also quite influential in the way the book winded up looking, and she was very patient trying different things.

Let’s see, what else? I’m very influenced by history, I’m an art history major, and I love historical settings, costumes, accessories, objects – odd objects that we no longer use. Glass plate [Historical] photography is a huge influence on me – I love that grainy… glimpse into another world which obviously wasn’t really like that – the medium made it look like that, but still it had a very atmospheric feeling. I actually would love to work in black and white, some of the work in my portfolio and on my website shows that influence more directly, but I just didn’t think that that would work for a picture book, certainly not my first picture book. Maybe when I’m a bit more established I can push the boundaries a bit more. So I didn’t go with that, but I did go with the 1930s, actually set very specifically in 1933. And I have a cupboard full of catalogs from Sears Robuck and Montgomery Ward from 1933, and every time I needed an object I would refer to those catalogs.

Lee: So like the satchel that Lester is carrying on the cover?

Lee: And even, I guess, the phone, right?

K.G.: Yes, the phone is from the catalog. 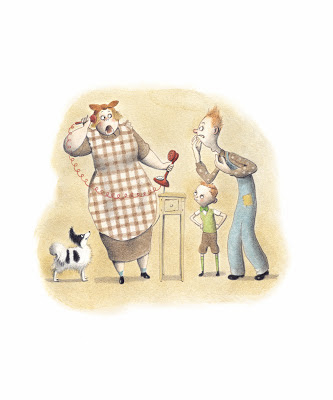 Lee: How cool. So, working on a project where you’re the author and the illustrator, how did the story evolve? Was it all text first, and then you did the images, or was it started from sketches?

K.G.: I am a relatively new author and illustrator, not the only one obviously, but I think the usual story is that illustrators… I would imagine that most of them start as an illustrator and then become an author to provide a vehicle for [their] illustrations, and I am actually a bit of the reverse. I’m an author who happened to be able to draw. And after years and years of trying to publish a manuscript without success, I actually turned to my artwork, did some illustrating classes, launched my website and finally found a foothold in the industry that way. So when I handle a story it’s as a writer, usually not [as] an illustrator. I usually don’t start with images. Maybe an image might bring something to mind, but I certainly don’t sketch out the story, it is purely from the narrative. Where that story began, like so many stories, is from personal experience. In fact, Cousin Clara is based loosely on my own Great Aunt Sissy, who, she wasn’t really much of a knitter, but she was a terrible present-giver. And I always remember anticipating her Christmas and birthday gifts, and Easter for some reason, with a level of dread. 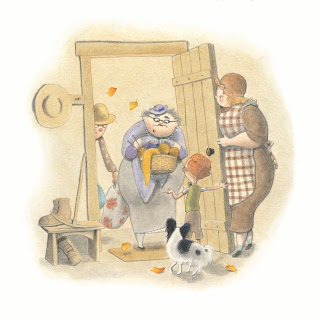 K.G.: And she did, in fact, have a mustache. And what I couldn’t portray unfortunately in the illustrations, is she had a leg that wouldn’t bend. I guess she had polio when she was very young. She didn’t have a wooden leg, but she had one leg that did not bend. So she was quite a gothic character!

Lee: And in a lovely parallel of life and art, her dreadful presents became your remarkable picture book.

Lee: Just like Lester finds some redemption in his own character, I guess. Can you talk a little bit about Lester’s arc? From having clowns on his “List of Suspicious Stuff Starting With C” to where he ends up?

K.G.: Sure. To be quite honest, in the beginning – I’m relatively new to this industry… and I think the story originally was a little light. It was specifically about the sweaters and Aunt Clara and Lester wasn’t very developed. So when Kids Can picked it up and I started working with Tara Walker, who was the original editor for the book, and then Yvette Ghione came on board shortly after Tara left, and also my agent, Lori Nowicky, we talked about beefing up Lester’s character. And I already had the skeleton of the story, so I thought to myself, what would make this even worse for this particular… it’s a horrible thing to happen to anyone, but what would make it really poignant? And I came up with this sort of O.C.D.-type, fastidious kid, who was very particular about what he wore, which is why you see him measuring his socks. Obviously you’ve got the bow tie… you’ve got his strange collection of things. I saw this boy having a very elaborate sense of order, very particular about everything, and so the arrival of this crazy character... basically messes up his world.

K.G.: ‘Pencil crayon’ is the Canadian term for ‘colored pencils.’

K.G.: Nor did I. Kids Can is a Canadian publisher, so that’s where that comes from. I had no idea what they were talking about, either.

Lee: Was there digital work done as well?

K.G.: No, there wasn’t. It’s water color base with colored pencil on top.

Lee: And what was the scale you worked on?

K.G.: I think I worked at about 120, and I regretted it, to be honest. I mean again, this was my first picture book… and I felt that particularly in the more heavily peopled illustrations with lots of detail, it lost some of its crispness, it became a little busy. Are you an artist, too?

K.G.: For visual art, there’s always going to be a bit of a lapse, a little bit of a difference between the original artwork and the finished artwork, and making that published art look as close to the original as possible is the great task that art directors face. In the future I probably will be working to scale or very close to it because I think I’ll have a better idea of how it will look in the end.

Lee: We love your book and I look forward to meeting you at the Summer conference!

Lee: Anything else you wanted to say?

K.G.: Thank you very much for the award to SCBWI. It’s very exciting and I can’t believe that it happened on my very first book.

See K.G. receive his Golden Kite Award at the Golden Kite Luncheon, and be part of all the amazing business, craft, inspiration, community and opportunity by joining us at the SCBWI Summer Conference in Los Angeles, August 2-5, 2013.  Details and registration information are here.

WONDERFUL interview. Those sweaters are just so gonzo great.
Thanks for the insight on process.