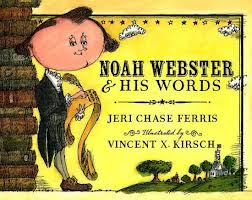 I was happy to connect with Jeri to find out more...

Lee: Can you tell us about finding out you'd won the 2013 Golden Kite Award for non fiction for "Noah Webster & His Words"?

Jeri: Lin Oliver phoned in the evening and, after a brief hello, asked if I was sitting down. I sat with a feeling of doom, knowing she was going to say someone had died. But no! After hearing the incredible news, I had a song-and-dance-fest with my Scottie. It was a wonderful evening indeed. But I spent the entire next day hovering by the phone, waiting for it to ring, waiting for a voice to say, “Uhhh, sorry, we called the wrong person.” It didn’t ring. NOAH really did win the Golden Kite!!

Lee: Why Noah Webster? What drew you to telling his story?

Jeri: I like to write about people who’ve done great things for America but aren’t as well known as they should be (or as I think they should be) and Noah definitely fit. Everyone knows one thing he did, right? He wrote Webster’s Dictionary. But very few people, aside from SCBWI members, of course, know what else he did for America. After the Revolutionary War, when we were the brand new United States of America, we had no president, each of the thirteen states had its own money and its own laws, and Noah feared our fledgling [adj: one that is new] nation would fall into thirteen pieces. So he did something, many things, about it. I was drawn to him because of his quirkiness, stubbornness, determination, and more than a touch of self-righteousness. (He always knew he was right.) And Noah was a master at promotion, a lesson for all of us. He traveled all over those thirteen states, lecturing, giving away free copies of his books to teachers and ministers and newspaper editors. One can only imagine what he would have done with a website and facebook page!

Lee: How do you organize your research materials (especially when there's lots of material out there on someone's entire life) to find the through line of the story you want to tell?

Jeri: My biographies are whole-life stories rather than one outstanding event as some great picture book biographies are, so I have a chronology to follow as framework. But within the chronology I must find what makes my character unique, special, different, worthy of a book. In Noah’s case it is stated in the opening line – “Noah Webster always knew he was right, and he never got tired of saying so (even if, sometimes, he wasn’t) and in the closing lines – “Noah’s words did unite America. He always knew he was right!” Noah was driven by his belief that the way to hold our country together was through unified spelling and language. He devoted his life to that cause, despite setbacks and ridicule, and he succeeded.

Lee: Deciding what to tell and what to leave out seems a huge challenge in any biography, but even more so for one limited to 32 pages! You used both the timeline and the "More About Noah Webster" end section to tell us about parts of Noah's life that didn't make it into the main narrative. Did knowing you could include things in that way free you up?

Jeri: Well, having a great editor helps. Kate O’Sullivan, my editor at Houghton Mifflin Harcourt, began with the word count on the first page of my manuscript. When the ms. came back with her comments, she had crossed out “2000 words” and written “not anymore!” with a smiley face. And she wasn’t kidding. But knowing I would have a time line and room for author’s note freed me to concentrate on the basics, and some fun stuff (who knew Noah Webster was into singing, dancing, and flute playing?) along with the most important deeds he accomplished for America. The additional info would still be available for all to read, but didn’t bog down the story.

Lee: The opening lines, "Noah Webster always knew he was right, and he never got tired of saying so (even if, sometimes, he wasn't). He was, he said, "full of CON-FI-DENCE" [noun: belief that one is right] from the very beginning." Were the word definitions always within the text? It's a great device that functions on so many levels.

Jeri: Yes, the definitions were always in, but I started a bit differently and not as well. I began with numbered definitions, for example: “confidence: 1. Belief that one will act in a right way, 2. Being certain.” Then I spoke to people at Merriam-Webster who suggested I use the parts of speech in the definitions, which made it much more usable and fun. So now it’s: “con-fi-dence [noun: belief that one is right].” And it’s been great to see reviewers pick up this idea and use it in their reviews of Noah!

Lee: Writing a birth-to-death biography has the challenge of ending with someone being, well, dead. This could be a huge bummer. But "Noah Webster and His Words" has a really up, empowered conclusion. Can you speak about how you approached the ending?

Jeri: That up-beat, empowered conclusion flowed naturally from all that Noah did, his enormous legacy, his never-give-up attitude, and tied back to the opening line perfectly. I love the satisfying feeling it gives.

Jeri: I joined SCBW in 1987 when I was beginning my first biographies, with the encouragement of Caroline Arnold, my non-fiction teacher at UCLA. SCBWI has been my anchor, my rock, my pathway, my font of wisdom ever since. When I lived in LA I was walking distance from the Century Plaza, and attended just about every conference, schmooze, and workshop SCBWI provided. Now, in northern California, I’d be lost without SCBWI and our conferences and critique groups. We cannot and should not do this alone.

Lee: Any advice for other writers working on non fiction projects for kids?

Jeri: Choose a person you admire because you’ll be living with him/her for many moons to come. Choose a person who made a difference. Choose a person who’s done something great, something unique, something exciting for kids to read about. Choose a person who has not already been written about over and over again – or if you do choose such a person, find something unknown or unexpected and focus on that aspect. Dig up those primary sources! Find letters, journals, old photos, newspaper articles. Find the family of the person. Go to museums and archives and libraries for first-hand information. Go to the places your subject lived and worked. And have fun! When you enjoy [verb: take pleasure in; have a good time] your writing, your reader will too.


Thanks so much, Jeri, and congratulations!

If you'd like to see Jeri receive her Golden Kite Award and attend her Non Fiction workshop, "Primary Sources! How To Find Them and How To Use Them," then you need to join us at the 2013 SCBWI Summer Conference.  You can find out all the conference information and register here.

To learn more about Jeri and her books, visit her website.