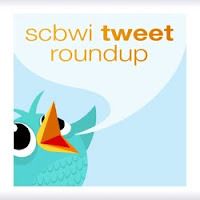 It's humpday which means it's time for me to share some of my favorite tweets of the week from the many writers, illustrators, editors and agents who are out there sharing information and joining in the conversation on Twitter.

Click on the Twitter handles (@name) to see the original tweets (and get to each tweeter's page should you wish to follow them). Follow the links included below to read the articles or blog posts these tweeters recommend.

Remember--whether you're signed up with Twitter or not, you can read tweets and click links to find helpful blog posts, useful articles, and timely news bits (like the ones below).

Among this weeks' picks are a host of vampiriffic tweets (including some comedy gold from the Onion News Network) in honor of the opening of the ECLIPSE movie.  I also came across a number of tweeted quotes, a selection of which are below. Enjoy!

@JaneFriedman: Most notable takeaway from September Issue documentary, Wintour: "When I find myself getting really, really angry it might be time to stop."

@planetalvina: "adolescence is where our bodies catch up to our yearnings."-Adam Rapp #fb

@AdviceToWriters: The public is a thick-skinned beast and you have to keep whacking away at its hide to let it know you're there. WALT WHITMAN

@RebeccAgent: today the world celebrates Bella, Edward, & Jacob. I already saw Eclipse, so I think I'll celebrate something else...

@TheOnion: "Some believe Stephenie Meyer should be stoned to death for encumbering Jacob Black w/ so much heartache." http://onion.com/dzsEvV

@mitaliperkins: Why do grown women like "dallying with a softly genteel monster” via the TWILIGHT franchise? http://bit.ly/99aIiP @csmonitor

@HUnderdown: What will be the nextvampires ? At ala10 I learned HMH thinks it's goblins. What do you think?

@4KidLit: Conference Round-Up: Writing and marketing tips from Words in the Woods http://bit.ly/cpaQSb

@restlessbjas: Want to attend a Writing Conference in your PJ’s? Now you can! WriteOnCon: Online Children’s Writers Conference http://restlesswriters.ca/2010/06/28/writeoncon-online-children%E2%80%99s-writers-conference/


@KAKraft: Entertaining post from Kristin Nelson on what she is seeing in queries and sample pages http://tinyurl.com/26wy58m

@ingridsundberg: And the plot thickens... tips and tricks and plot devices. All things plot: http://tinyurl.com/35m5u83


@molly_oneill: The six-year-old in me is quite pleased that riding the M train is now part of my routine, and believes the whole change=b/c M is for Molly!


@PublishingSpy: Watching The Proposal. Tell me, how does she afford Louboutin, LV, & Herme's and work in publishing? #unrealistic

Great quotes. And thanks for including the tweet about the WritersCon conference. I'm sure the organizers will appreciate it.

I am so grateful for this blog, Alice. The Roundup is incredibly valuable and time-saving...and thanks so much for listing my guest post at @4kidlit.