The National Center for Children's Illustrated Literature in Abilene, Texas is presenting Golden Kite Golden Dreams: the SCBWI Awards Retrospective. This amazing exhibit curated by David Diaz features Golden Kite Medal and Honor Winners from 1974 to 2010 and is the first retrospective of its kind.

The exhibit features artwork from an array of prestigious, influential and talented artists, many of whom are also Caldecott Award Winners. Media range from ink, pencil, acrylic, gouache, and watercolors to cut paper. The exhibit displays 75 pieces of artwork from 50 artists. Check out this list: 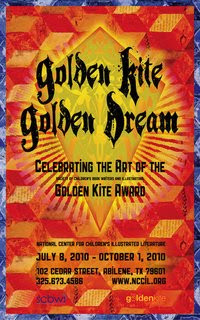 Golden Kite, Golden Dreams runs July 8th through October 1st at the NCCIL, with an opening event Thursday, July 8th, featuring a demonstration from two visiting illustrators and a talk on the Golden Kite Award by Lin Oliver and Steve Mooser. There's an exhibit opening gala dinner on Friday, July 9th, during which NCCIL Museum Director Debbie Lillick, David Diaz and Lin and Steve will share a few words. And Saturday, July 10th, will be a day of exhibit events and talks welcoming SCBWI members, including demonstrations by Barbara McClintock and Richard Jesse Watson.

(If you're not in the Abilene area the Hilton Garden Inn in Abilene is offering a rate of $99 per night, with a made to order breakfast included.) 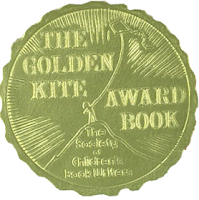 Thanks for the blog post and getting the word out, Alice. I'm helping NCCIL with the news release and publicity. Abilene is a fun city, and Golden Kite, Golden Dreams and the conference are perfect reasons for SCBWI members to visit.

I am SO hoping to attend on the 10th. Will keep fingers crossed that things work out with the kids.

(I wonder if one can bring kids to something like this?)