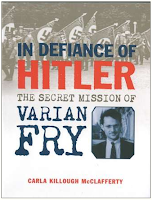 If Carla McClafferty is any indication, the life of nonfiction/biography author is full of excitement!

Carla, award winning author and former SCBWI Regional Advisor for Arkansas, will be signing copies of her book IN DEFIANCE OF HITLER: THE SECRET MISSION OF VARIAN FRY at the United States Holocaust Memorial Museum in Washington D.C. on June 25 from 1-4 PM. Carla will also be presenting the keynote speech to the American Association of School Librarians luncheon at ALA on June 28 in D.C.

"My book, IN DEFIANCE OF HITLER: THE SECRET MISSION OF VARIAN FRY, is about an American Holocaust rescuer named Varian Fry. Fry volunteered to travel to war-torn France in 1940 in order to help trapped refugees escape from Europe. In the beginning, the plan was that he would stay for two weeks and assist specific intellectuals who were in danger. However, when he arrived in Marseilles, France, the situation was more complex than he expected, so he ultimately stayed there for 13 months, during which time he lived a double life. On the surface he ran the American Relief Center as a cover for his under-cover purpose of helping refugees escape. He saved the lives of more than 2000 people including famous people such as Marc Chagall, Max Ernst, Otto Meyerhof, Hannah Arendt and many others.

Varian Fry was the first of only three Americans honored at the Yad Vashem in Jerusalem as 'Righteous Among the Nations' an honor given to gentiles who risked their own life to save the life of Jewish people during the Holocaust."

The United States Holocaust Memorial Museum (USHMM) supplied many photographs that Carla used in her book. On 2009 she did a presentation about Varian Fry for the employees of the USHMM bookstore (where her book is sold) and they suggested she come back for a book signing event.

Last year she was also invited to Marseilles, France, to participate in a conference about Varian Fry held in the new building at a High School which was named after him. While in Marseilles, Carla did a presentation to an English class at the High School, and spoke at the American Consulate.

While she's in D.C. for the June events, Carla will be spending three days at Mount Vernon to research her upcoming book THE MANY FACES OF GEORGE WASHINGTON: REMAKING A PRESIDENTIAL ICON, out from Carolrhoda in 2011. Her other acclaimed titles include SOMETHING OUT OF NOTHING: MARIE CURIE AND RADIUM (Farrar, Straus and Giroux, 2006), THE HEAD BONE'S CONNECTED TO THE NECK BONE: THE WEIRD, WACKY AND WONDERFUL X-RAY (Farrar, Straus and Giroux, 2001); and FORGIVING GOD.
Posted by SCBWI at 10:05 AM

Labels: Carla McCafferty, In Defiance of Hitler, Regional Advisors, Something Out of Nothing, The Head Bone's Connected to the Neck Bone, US Holocaust Museum, Varian Fry

Wow, what an honor to sign at the Holocaust Museum.

Thanks for sharing about this book. It is such an honor to sign at the U.S. Holocaust Museum. It sounds like a great book about an unsung hero many of have never heard of but should know about.

Carla is a great writer and does this state proud, but it is spelled ARKANSAS, not Arakansas.

Vicki, I could do nothing by typos yesterday. Ugh. Thanks!