Thinking of Starting a Series? Check out this advice from Kwame Alexander, Roseanne A. Brown, Chloe Gong, Adalyn Grace, Joan He, and Aiden Thomas

There's a lot of wisdom in this article in Publishers Weekly where Iyana Jones interviewed all six authors with new series openers, "Series Openers: Six Authors on Their New Beginnings." 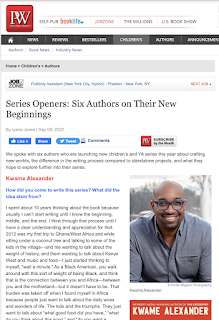 Standout moments from the interviews (for me) include:

“I always feel like poets who write novels in verse have a much harder job, ’cause you have to write a poem and you gotta write a novel. You have to write a poem on each page, and it has to feel complete, and it has to feel like it’s incomplete enough for you to want to turn the page. That’s work! I feel like it’s the same thing with a trilogy. You want to complete it, but at the same time you want to leave just enough for the reader to crave and grow impatient waiting for that next book in the series. If you can figure that out, that’s great.” —Kwame Alexander

“With series, on the other hand, you’re playing the long game. You can plant seeds and hints in book one that don’t need to come to fruition for several more books. It definitely takes a lot of planning and is more taxing on me creatively to weave something so intricate, but it’s an amazing feeling when you get that payoff you can only get from a story that’s had that extended room to blossom.” — Roseanne A. Brown

“Before I write, I need a basic elevator pitch so that I’ve articulated to myself what I want to achieve in the book. Foul Lady Fortune’s pitch was: immortal girl wants to atone by saving her city from a conspiracy. Having that as a starting point means I can draw up the complete arc between “this is what the protagonist wants” and “is this achieved at the end of the series?” which I think is critical for keeping a reader interested! After that I can start building elements, such as giving the untrusting protagonist a devilish love interest, or researching true history so that my speculative elements interact with commentary in a meaningful way. But premise, to me, is like the spine that holds a book upright.” —Chloe Gong

“The first thing I knew about this story was its prologue, where we meet a baby who somehow manages to defy Death himself in this beautifully eerie backdrop. Throughout all the versions of this story, that scene has never changed. I always knew it was the opening, and from there I started asking myself who this baby would grow up to be. What kind of person is she? What does she want? Everything in the story is built around Signa, to further help tell her story.” — Adalyn Grace

“Like many kids of the Chinese diaspora, I was told stories from Romance of the Three Kingdoms growing up. Names such as Zhuge Liang and Liu Bei are basically synonymous with “clever and loyal” and “honorable righteousness,” respectively, within the culture. But it wasn’t until college that I really read and analyzed the text, and as I thought more deeply about the enduring legacy of its characters in contemporary Chinese society, I came up with a “what if” question that ultimately became my midpoint twist, from which my stories tend to spring.” —Joan He

“It’s wild to plan all the way to the very end of a book I haven’t even written [yet] before I could start writing the first book. It’s also a huge challenge to plot out two books and keep all that information in my head. It’s way easier to do a standalone because I’m in the moment and don’t have to fact check and make sure I don’t forget to tie up any loose ends. More than once I’ve come up with an idea and thought, “I should change this in Sunbearer!,” only to remember I can’t because it’s already been printed and now exists in the world! But then again, one thing that’s really cool about writing a series is that I get to see folks read The Sunbearer Trials and express their excitement, which characters they like best, and also fan theories. It makes working on the sequel a lot more exciting, and it’s nice having readers cheering me on as I go.” — Aiden Thomas

Even choosing those highlight quotes was hard. Go read the article, and read the books that open their series! Good luck with your series, too.