The Goals of Lettering in Comics

Mentors have told me that the best lettering in comics is the lettering that you don’t notice. It’s the pages where the lettering blends seamlessly into the art, where the reader is immersed into the story by the lettering. Lettering is, however, often noticed when a reader is confused on the reading order, or if it’s difficult to read.

For those unaware, lettering is the name of the process of adding in the written dialogue, the speech bubbles, and sound effects. Sometimes the artist letters their own work, sometimes they draw in the bubbles and have someone else letter, or hand draw sound effects, and sometimes a letterer adds all of these parts on top of the final art file themself. It depends on the project, the team, and their process. 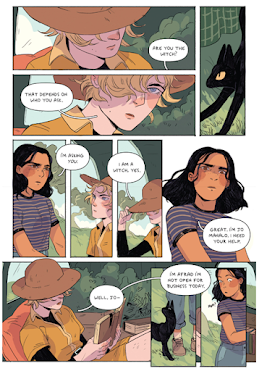 The goals of lettering should be to be accessible and legible and to elevate the art and the story without distracting from it. Colors used, font choice, bubbling, and placement all contribute to the success of lettering.

An example here I love is from Mamo by Sas Milledge. This page shows a conversation between characters, and the lettering guides the reader between each speaker in an S shape that also takes the reader throughout the page. When lettering, or planning for lettering as an artist, it’s good to think of ways you can use the bubbles to lead readers’ gaze, as well as the way readers would naturally read a page. For example, for English readers, one would naturally try to read left to right, top to bottom. While exceptions can be made, it’s important to do those intentionally, and to make sure that the page is clear with that in mind.

When it comes to accessibility, font and size can come into play here. Here I have a test panel I did as a student. While I loved the font (and still do!), I learned later that this style of ‘E,’ where it looks like a backwards 3, is particularly difficult for people with dyslexia. Most comic fonts are already dyslexia-friendly, most famously Comics Sans, but it’s important to check before putting out a book that could cause frustration, especially in children’s books.

Lettering is often a quiet part of making comics and graphic novels (if the number of times I’ve had to explain to friends and family what lettering is or how it works is anything go by, anyways), but it’s a critical part of each book production. It’s often what makes a comic, well, a comic, and is what binds the writer’s words to the visual storytelling.

Cindy Harris (she/they) is a Mexican American comics artist and illustrator that works in the publishing industry. She has worked as a letterer, editor, illustrator, and writer, and loves stories about identity, relationships, and growth.
www.cyngharris.com
Posted by Cindy Harris at 6:00 AM