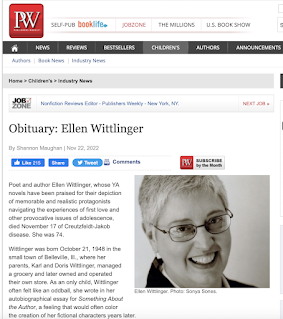 Publishers Weekly announced the passing of Ellen Wittlinger earlier this November, 2022. Among other books, Ellen wrote Parrotfish, one of the first YA novels with a Trans main character. It was hopeful, had a sense of humor, and didn't have a tragic ending (thank you, Ellen!) She also wrote the YA novel Hard Love, which won a LOT of awards, and had a main character who identified as a lesbian.
Ellen did something else really remarkable. At the 2007 SCBWI Summer Conference in Los Angeles, Ellen did a breakout session about writing LGBTQ characters. It was the first time the queer community was acknowledged in the programming since I'd started attending SCBWI events in 2004. It made a BIG impact.
Myself and a bunch of attendees of Ellen's breakout session hung out in the hallway to talk afterwards, and that evolved into the LGBTQ+ socials at both the summer and winter SCBWI conferences, which have happened at every major SCBWI conference since 2009!
Ellen was also incredibly gracious in blurbing both my debut novel Queer as a Five-Dollar Bill and my debut nonfiction, No Way, They Were Gay? I'm really grateful for all she did.
One person can make a difference, to readers, to a community, and to the individuals they connect with on the journey.
Thanks, Ellen. Here's to your memory!
Illustrate, Translate, and Write On,
Lee
Posted by Lee Wind, M.Ed. at 6:00 AM