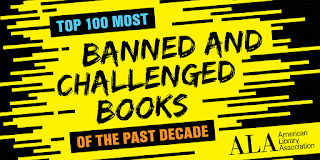 The American Library Association's Office for Intellectual Freedom has tallied the numbers, “reviewing both the public and confidential censorship reports it received.”

Noting that they estimate 82-97% of challenges remain unreported, they list the Top 100 Most Banned and Challenged Books from 2010 through 2019.

Here are the top 20:
The Absolutely True Diary of a Part-Time Indian by Sherman Alexie
Captain Underpants (series) by Dav Pilkey
Thirteen Reasons Why by Jay Asher
Looking for Alaska by John Green
George by Alex Gino
And Tango Makes Three by Justin Richardson and Peter Parnell
Drama by Raina Telgemeier
Fifty Shades of Grey by E. L. James
Internet Girls (series) by Lauren Myracle
The Bluest Eye by Toni Morrison
The Kite Runner by Khaled Hosseini
Hunger Games by Suzanne Collins
I Am Jazz by Jazz Jennings and Jessica Herthel
The Perks of Being a Wallflower by Stephen Chbosky
To Kill a Mockingbird by Harper Lee
Bone (series) by Jeff Smith
The Glass Castle by Jeannette Walls
Two Boys Kissing by David Levithan
A Day in the Life of Marlon Bundo by Jill Twiss
Sex is a Funny Word by Cory Silverberg

Books for kids and teens, classics, books celebrating diversity, books including LGBTQ characters and themes... Take a few minutes and read the full list. And then, go create what you think kids and teens need to read anyway.
Because we can't let the prejudices of some prevent everyone else from finding the books they want, the books that could make their lives better.
As Ellen Hopkins - who has FOUR books on the top 100 list (Crank, Burned, Glass, and Tricks) - said in an interview back in 2009, when asked, “Why do you think people want to stop others from reading something they don't like?”

“I think some of them have the purest of motives... maybe we can make "those bad people" become "good people like me." Or, they think they can protect kids by not letting them read about the bad things in life. Uh, seriously? Get real. As I say in my Manifesto poem, ‘ignorance is no armor’ against the things kids see/face/deal with/ choose to do or not to do every day.” –Ellen Hopkins