Writing a Sequel? YA Author Brent Hartinger has some rules that are thought-provoking (and pretty wise) 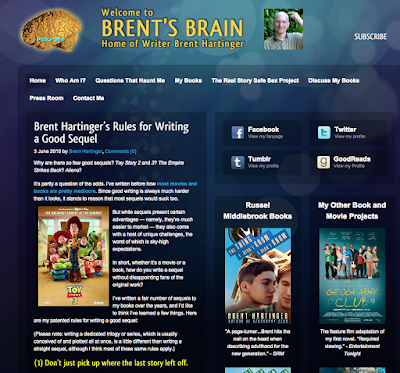 I heard Brent talking about sequels (what makes a good one and why some don't work) on his Media Carnivores podcast with fellow author Erik Hanberg. It was inspired by this post on Brent's blog, "Brent Hartinger's Rules For Writing A Good Sequel," which was in turn inspired by Brent's own writing of sequels. He's penned five sequels to his ground-breaking "Geography Club," plus a short story.

There's a lot of good information shared, especially this comment that leapt out at me:

"The point of a sequel — what viewers and readers really want (even if they don’t know it) — is to make people feel the way they did the first time around."


To feel the way they did, not to pick up where that first story left off, or to tie up loose ends left at the end of the previous book.

"What readers and viewers really want is to once again feel the way the first story made them feel. But you can’t go home again, and you can’t step in the same river twice. Ironically, the only way to make them feel the way they did before is for you, the writer, to do something fresh and different."


He cites some great examples (many from the world of movies) of how things have to be new to work. (Think Aliens. It was a new genre – Action-Adventure, when the first Alien movie was horror.) But when sequels didn't give us something new, they weren't so satisfying (think of Speed 2, where the only new thing was the boat. And no Keanu Reeves...)

Brent's advice to add a great new character and make the stakes different, while at the same time giving the reader the same feeling as with the original, might just be part of the recipe of what makes a sequel work.

Do you have your own rules for sequels?

Hey My self Erika Viktor owner of http://www.erikaviktor.com. I am professional short story writer from many years. I wrote many book and stories and planning to write sequel of my one book.

Thanks to post this blog it will help me alot.