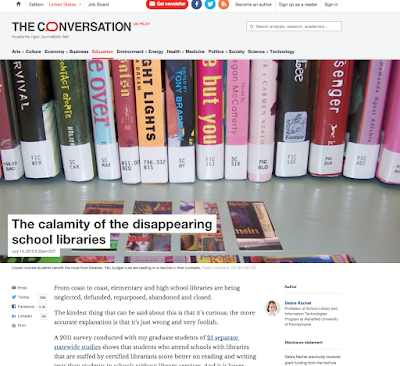 Debra Kachel, Professor of School Library and Information Techologies at Mansfield University of Pennsylvania writes in "The Conversation" about the disturbing trend of elementary and high school libraries "being neglected, defunded, repurposed, abandoned and closed."

Citing statistics and data to back up the trend, including:

"California has hemorrhaged school librarians to the point where it now has the worst ratio - 1-to-7,000 librarians-to-students – of any state in the nation.

In 1991, there were 176 certified librarians in Philadelphia public schools. Today there are 10. It appears that 206 out of 218 classroom buildings in the school district of Philadelphia have no librarian. Two hundred Philadelphia schools do not have a functional library book collection. A majority lack the technology to access necessary e-resources. And 85% of these children come from homes in poverty.


Debra then runs through the proven impact of having libraries and librarians (including a 2011 study that found that "...states that gained librarians from 2004–2005 to 2008–2009 — such as New Jersey, Tennessee and Wyoming — showed significantly greater improvements in fourth grade reading scores than states that lost librarians, like Arizona, Massachusetts, and Michigan.”

The article explores why the cuts are happening, and looks at some legislation that might help.