The Society of Children’s Book Writers and Illustrators has created a member category for Translators. Why? Children deserve to explore their whole planet through books. Translators bring them books written in many languages, in many places.

In addition, Summer Conference 2015 will feature the first translation workshop at an Annual Conference: “The Art and Business of Translation” by Nanette McGuinness.

Nanette is a prolific translator from French and Italian into English, of conventional and graphic novel series including Sherlock, Lupin & Me and Geronimo Stilton Graphic Novels.


Avery: How did you become a translator of children’s books? What studies and experiences prepared you?

Nanette: I spoke French before English and have written all my life, despite being a singer. In addition to having a Master’s in Vocal Performance, I’ve also got a PhD specializing in musicology—essentially, writing about music history.

During an extended period of health issues when it was harder to perform, I found myself drawn to writing for children, as I’d never lost my love of children’s books. I also found myself drawn to literary translation. Yet the entry point to translating children’s books wasn’t clear. I started writing articles and stories and doing commercial translation, hoping to find literary work. About seven years later (health and singing career once again thriving), I was looking for the right house for a manuscript submission when I bumped into a publisher who needed a translator.

Studies and experiences that prepared me:

• Foreign language classes;
• A summer exchange student program in Switzerland;
• Language studies in Germany;
• Singing opera and other vocal music in many languages;
• Performing in Europe;
• A fabulous critique group;
• SCBWI;
• Plus when I’m not singing or translating, I read, read, read.

Avery: What is a recent project you are excited about?

Nanette: Last year, I translated four upper MG novels that I really enjoyed. Two come from a wonderful series about a teenage Sherlock Holmes who solves mysteries with his friends: Sherlock, Lupin, and Me. 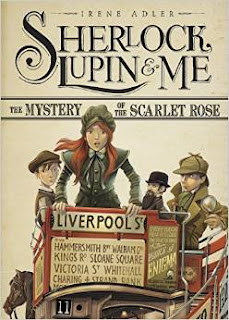 The stories are well executed, with excellent local historic color and good writing. I was thrilled to see that the first volume—from before I came on board for the third and fourth volumes—is on the International Literacy Association’s Children’s Choices 2015 Reading List.

Avery: You have translated both graphic and conventional novels. What are some differences between these forms that have affected your work as translator?

Nanette: Structurally, a graphic novel (GN) is more like a picture book than it’s like a conventional novel, in that in a GN over half the narrative and plot are carried by the illustrations. Except for sidebars and captions, the text is almost exclusively dialogue. As a result, much is left out in the text and only made clear in the illustrations. 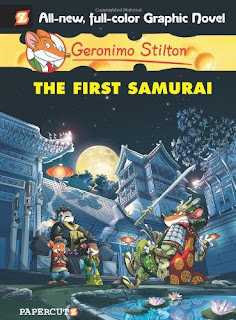 For either, it’s important that I leave myself enough time to translate, proofread several times and then put the story aside, so that I can re-read it later with fresh eyes and ears in order to make sure that I’ve captured the voice, story, and characters and that all the pieces of the new, translated whole sound organic and true.

Avery: You perform as a professional opera singer. How does this career connect with your work in translation?

Nanette: As an opera and classical singer, I spend part of every day working in multiple languages—what a joy! And when I’m performing abroad, the cast, crew, conductor, etc., often speak different languages.

Singing and translating are highly creative acts that involve the recreation of another artist’s vision. In both, I apply my musicality to words—my inner sense of rhythm, pacing, flow, etc.—and communicate meaning across different media. So I take one set of symbols—a text in one language or music in written notation—and transfer the content into another medium—another language or a live performance. Although making music is more than simply interpreting written notation, the basic analogy of singing to translating works surprisingly well.

Interestingly, both activities are much like a duck gliding across a pond: when done well, singing and translating appear effortless and smooth to the eye, while there’s actually a good deal of mad paddling and hard work going on below the surface to give that easy appearance. Tiny disturbances immediately ruffle the surface.

Avery: Please describe one challenge you have faced as a translator.

Nanette: Literary translation is a labor of love, as is all creative work: on average, it does not pay well and takes time to do right, and there’s always someone else willing to step into your shoes for less. With everything on computers, good ergonomics are a constant challenge, as is finding the time to do everything I love.

Avery: Please tell us about a children’s book in one (or more) of your source languages that you love.

Nanette: How about a book and a series?
• Le petit prince, by Antoine de Saint-Exupery (in English, The Little Prince), one of the most translated and adapted books in the world.
• The Asterix series, French graphic novels about two incorrigible, unconquerable buddies from the time of the Roman empire. Written with tongue firmly in cheek, these have continued to tickle my punny bone ever since I encountered them.

Avery: What are your all-time favorite children’s books in translation, from/into any language?

Nanette: Heidi (by Johanna Spyri), which changed my life: because of Heidi, I chose to go to Switzerland as an exchange student. The Tomten—a timeless, beautiful picture book—Pippi Longstocking (both by Astrid Lindgren), the Moomin series by Tove Jansson, and the stories of Hans Christian Andersen. Plus the basics—Aesop’s Fables, Mother Goose, and the Brothers Grimm. Among graphic novels, Hergé’s Tintin series is a classic.

For translations out of English, Roald Dahl’s Charlie and the Chocolate Factory and Lewis Carroll’s Alice in Wonderland and Through the Looking Glass.

Avery: Thank you so much for this interview! I know many will want to visit your website and check out your workshop at Summer Conference 2015.

Nanette: Thanks for the great questions, Avery!

To attend Nanette's breakout session, "The Art and Business of Translation," register for #LA15SCBWI here.
Posted by Lee Wind, M.Ed. at 6:00 AM