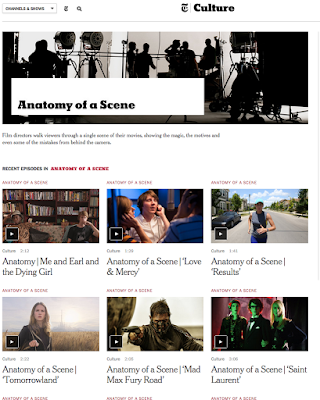 The online New York Times has an ongoing feature, Anatomy of a Scene, where film directors walk viewers through a single scene of their movies, "showing the magic, the motives and even some of the mistakes from behind the camera."


It's fascinating watching, and offers story/writing insights – like how Dr. Martin Luther King, Jr. in the scene with his wife in the movie "Selma," is shown taking out the trash from under the kitchen sink, but not knowing where the new trash bags were kept because he hasn't been home enough to know. As director Ava DuVernay explains, they needed to "find places to humanize him."


And there are illustration/art insights as well – like where director Kenneth Branagh explains that the long-distance camera work in "Cinderella," did two things for them: First, it helped not scare the horses the actors were on, and second, it created a flattened background, giving him "a sort of psychedelic primal backdrop of natural colors" that matched the emotion of the moment when Cinderella and the Prince meet for the first time, before the ball...

There are lots of different movies to watch narrated scenes from, and so many structural underpinnings, story logics, and visual elements to learn. It's a great resource for all of us who tell stories. And maybe even a productive way to procrastinate a bit, too!


What a great idea!