Why Hasn't The Number of MultiCultural Books Increased In 18 Years? - Lee & Low's Study Raises Questions That Need To Be Addressed 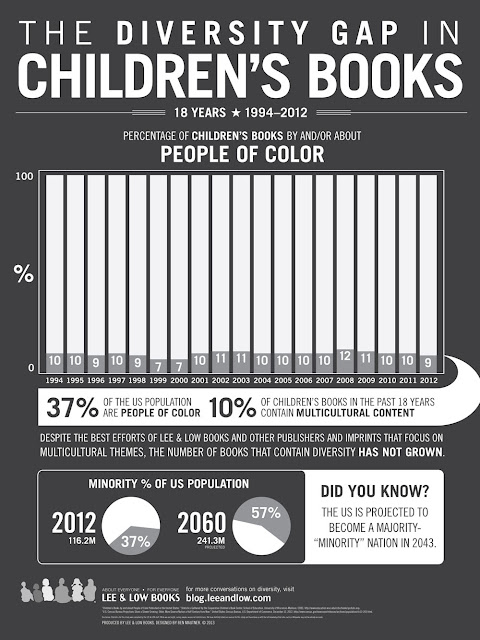 Lee & Low released this infographic, study and discussion, trying to get at what's going on with the numbers and behind the numbers.  It's bringing some much-needed attention to the fact that when you look at children's books by and/or about people of color,

"the number of books that contain diversity has not grown."


They also asked some luminaries in our field what's going on.  Some highlights:

I think we saw the numbers of multicultural books flatlining when school and public libraries began to get funding cuts, so that publishers came to rely more on bookstores for sales. At around that time, we also saw the rise of Amazon, Borders, and B&N. I’ve heard many times from publishers that the “buyers at B&N” believe multicultural books don’t sell. When they are not stocked in these bookstores, it becomes a self-fulfilling prophecy.

There may be a perception among some teachers and others whose job it is to connect children and books that “multicultural books” are only for or mainly for so-called minorities, rather than for all children.

I think authors of color who do not produce manuscripts that fit an expected demographic, who, for example, are writing books featuring characters who are middle class, instead of poor, or characters who live in two-parent households, instead of single-parent homes, are finding it difficult to place their manuscripts. That, of course, speaks to the perception that only people of color will want to purchase books by people of color, and so publishers want to play to the audience which they believe—wrongly or not—is the average, or the norm.

"...it’s a many headed Hydra of difficulties. It can be overcome. There just needs to be a concentrated effort."