The 2013 Crystal Kite Award for the SCBWI Region Africa is Neil Malherbe for his novel, "The Magyar Conspiracy," published by Tafelberg Publishers. 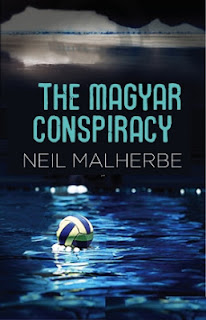 I contacted Neil to find out more...

Lee:  Please tell us about your book!

Neil:  ‘The Magyar Conspiracy’ is in the Boys Own Adventure/murder mystery genre. Set in Cape Town and Hungary, it tells the story of 16-year-old Sándor Novák, whose father dies in mysterious circumstances on Table Mountain. Sandy, as he is known to his friends, must travel to his father’s birthplace, Hungary, to uncover some of the secrets of why his father was killed. The parallels between South Africa and Hungary, and their transition from rigid totalitarian states to freedom (and the power void left in that wake), are the background to the story. I was grateful that the book won the Sanlam Prize for Youth Literature here in South Africa, along with the wonderful Crystal Kite award from SCBWI.

Lee:  How long have you been involved with SCBWI, and can you share what you feel you've gained by being a member?

Neil:  Only since last year, so I have not yet had the benefit of any meetings but I have thoroughly enjoyed reading articles on the website, as well as in the Bulletin. I am excited to be speaking to members of the Gauteng branch early in July, and thank them for their kind invitation.

Lee:  Do you have any advice to share with other children's book writers and illustrators?

Neil:  I know that it is probably a cliché, but keep believing in your work – if it is good enough, somebody may well say yes to publishing it! It took three years for mine to be published.

Also, as difficult as it is to expose your labour of love to the scrutiny of others, as with all works of art it is only by revealing it and asking for honest advice that it can be honed to its best possible form.

Keep writing – and reading! And dreaming of what might be! Write what you know – it makes the writing more authentic. If not, make sure that you research thoroughly.

Go for walks – it’s good for your heart...and your spirit...and your writing. It’s amazing how allowing a tumbleweed of an idea to roll around your head while walking just seems to gather up scraps of story.


I also connected with Elaine Ridge, who along with Marjorie van Heerden is co-Regional Advisor for SCBWI South Africa, to find out more about their region and Neil's win...

SCBWI SA does its best to make the benefits of SCBWI membership clear, both to members and to those who have shown interest. While some of our members have an established national and even international reputation, most have not yet been successful in having their work published. With the help of grants we have arranged programmes of professional development exclusively for members. Doug Cushman provided an inspiring start in his superbly clear and practical presentations during parallel retreats in Gauteng and the Western Cape. Participants were given individual intensives. There have been follow-up retreats/workshops for writers and illustrators in both places.

We try to have a publishers' day every year in which writers and illustrators can meet publishers and punt their latest work. This always leads to new commissions.  Opportunities for critique are usually offered in open meetings as a way of attracting new members. We also have a stand at the Book Fair in Cape Town - good advertisement for the organisation and an opportunity for members to make valuable contacts in publishing. For the rest, we have workshops and a range of speakers - speaking on their work or aspects of the children's book trade. Our members feature at national and international conferences and SCBWI SA is one of the nominating bodies for the Astrid Lindgren Award.

Marjorie and I were delighted to have Neil's book chosen. It is a rich, enthralling youth novel and a worthy winner. The previous two winners in Africa were illustrated books for young readers. This award valuably affirms another genre. The Magyar Conspiracy has received favourable reviews in The Star, The Mail and Guardian and The Cape Times. This is quite an accolade, as children's literature is not often noticed in the press. It is the more impressive, because this is Neil Malherbe's first novel. Neil will be speaking about his book at a meeting in Gauteng on 2 July. Later this year SCBWI SA celebrates its 10th anniversary and we hope he will be able to come to the celebrations in Cape Town.


To find out more about Neil you can go to his blog, or follow him on twitter at @NeilMalherbe

To learn more about SCBWI South Africa, go to their website here.

Thanks to both Elaine and Neil, and cheers to Neil for his Crystal Kite win for "The Magyar Conspiracy!"