Inspiration as we 'commence' 2013 - The Art Of The Possible

Poet Kenneth Koch crafted this poem, published in his "The Art of The Possible! Comics Mainly Without Pictures" 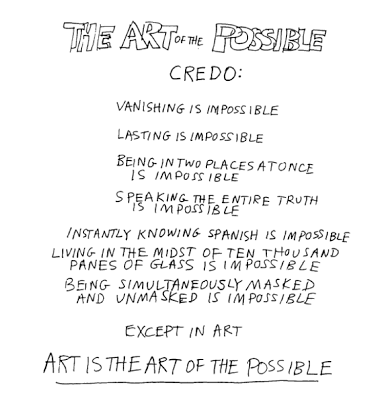 
THE ART of the POSSIBLE
CREDO:

Being in two places at once is impossible

Speaking the entire truth is impossible

Being simultaneously masked and unmasked is impossible

ART IS THE ART OF THE POSSIBLE


Inspiring words as we launch ourselves into 2013!  Happy New Year!

ps - my thanks to Tony Kushner for quoting Koch's poem in his speech at Columbia's School of the Arts 2011 graduation (40 minutes in.)

The Pen and Ink Blogspot said...

Thanks Lee. We wish you The 12 Days of Writing, (the good version)
http://thepenandinkblog.blogspot.com/2012/12/the-twelve-days-of-writing.html

What a great poem!