The finale of my discussion with Tomie... 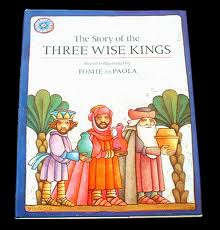 Lee:  With picture books like "The Night of Las Posadas," "The Story of the Three Wise Kings" and "Pascual and the Kitchen Angels" have you found differences in creating and marketing books with religious themes, between the religious and the trade market?

Tomie:  Those books, I don't consider them Religious with a capital "R", because I don't have an agenda about pushing any kind of a spirituality on anybody.  I like to call them spiritual books, or they're about other-worldly things, they all come out of a love of story. When I was a kid, I was brought up as a Catholic, and somebody said, 'are you practicing?' And I said, 'no, I practiced long enough that I've got it down-pat.  I don't have to practice anymore.'

Tomie:  And I didn't need to be recovered because nothing, never hurt me.  Years ago, a wonderful spiritual writer from England, who was a real wacko, she was really strange, she was a mystic and she had extra-sensory perception, name was Caryll Houslander, but she said something, and this was years ago when I was very involved in the liturgical art movement, because I started out painting murals in churches and designing vestments and doing all that kind of stuff back in the 50s, before I ever did a book.  She said that the stories of the saints read like fairy tales, really good fairy tales.  There's something charming, when I discovered the story about Pascual from my Mexican friends, they all told me this wonderful story about little Pascual, who because he was ignorant, they made him be the cook, and he couldn't cook, but he could pray really well, and the angels came... and I think that is so charming. 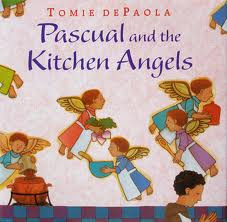 Lee:  And it did make me think of the mice making Cinderella's dress.

Tomie:  Yeah.   That's right!  And Las Posadas... Have you ever been to the Posadas in Santa Fe?  It's just fascinating. 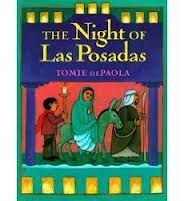 Lee:  No, but I live in Southern California and I've seen the paper bags with the candles inside...

Tomie:  Yup!  Well if you ever get a chance to go at Christmas-time to Santa Fe, they do this Posadas, which means, 'the inn.'  It's an old Spanish tradition of Joseph and Mary go from house...  In fact, in Mexico, they did it until just recently - when the drug stuff really got desperate in Mexico, neighborhoods had to stop it because people were coming into their houses and stealing televisions, but it used to be, that neighborhoods, you'd go to everyone's house on this special night singing carols, or old songs, and they had to give you food, and then you'd go to the next house looking for the baby Jesus.  And one house would have the baby Jesus.  And you'd stay there and you'd eat chili and everything and stay all night.  And they do this in the Plaza in Santa Fe, and there's always a Devil that has to appear and say 'no, no, you can't come in - don't let them in' - and Santa Fe has two Devils because the Plaza is so big.  And so the whole thing was so charming that I wanted to put it down in a story.  There actually was, and I think she's still alive, there was a Sister in a little town outside of Santa Fe who organized the whole thing, I think she still does.  Her name was Sister Angela so I created the character of Sister Angie, really all based on something that could have actually happened.

Tomie:  But I love miracle happenings.  So okay, it happens to be Joseph and Mary who show up.  But it could be Fairy Godmother, it could be... maybe the Golden River, it could be anything... (Laughs)

Lee:  And with the snow on the statue, really, it was so beautifully done.

Tomie:  Good!  (Laughs)  I think that should be on the flap-copy.

Lee:  (Laughs)  You're welcome to use it!  So, Lifetime Achievement!  What does that mean to you?

Tomie:  You know, this is what happens if you live long enough.  I started getting these Lifetime Achievement awards a couple of years ago.  I got a Lifetime Achievement award from the New Hampshire Writers Guild.   Last year I received The Laura Ingalls Wilder Award for my Lifetime Achievement from the American Library Association.  But this one is kind of special because, The Original Art Show - a woman named Dilys Evans started the whole thing, she was an artist's agent, and she really felt that illustration was being ignored.  And The Society of Illustrators has been around since the 30s, if not earlier.  It was an old boys club, in New York, still in the original building, but she got them to host what she called 'The Original Art Show" where publishers and/or illustrators can submit work to be chosen - for the art to stand alone.  They're illustrations from a book - but that original art from children's books can stand alone as art.  And about nine years ago they decided to start giving Lifetime Achievement awards.  And they give two: One is to a living person, and the other one is posthumously.  I'm just lucky I got it while I'm alive!  (Laughs.) What they do, is they have a jury that picks out the original art for each annual show.  And they have a jury that selects five people in each category to be voted on by the illustrators that have had their work chosen to be in the Original Art Exhibition for the past three years.  So it's an award that's given to a person by their peers, which really means a lot.  It means that some of these young illustrators like my work, which is really kind of wonderful.

Tomie:  I know.  I even got a library named after me while I'm still alive.

Tomie:  I'm just worried that they're not going to let me kick off.  (Laughs.)

Lee:  So what's the next challenge or goal for you?

Tomie:  The next challenge is to get up in the morning and go to work!  (Laughs.)  And I'll tell you - People say, 'oh, by now, it must be so easy.'  Well it isn't.  I think it gets harder as I get older.  Because I know what's ahead.  I know, once I start a project, that's my life for the next year or two or whatever.  I just finished my Fall book for 2013.  Everything went off today, everything's at the publisher, which is great.  We have to get things in earlier and earlier and earlier, which is really a pain.  'Cause now it means I have to start thinking about 2014, so I got a couple of days I can rest.  (Laughs.)

I'm planning to spend the entire Winter painting.  I had a rough Winter last year, I was very ill, and I suppose that comes along with getting to be, I turned 78 this year, and I know that my voice doesn't sound like an old man's voice, which is kind of off-putting to me, because I look in the mirror and then I'm always surprised by what's looking back at me.  I've always painted as well as done my illustrations, and because I was ill last Winter, I really couldn't get paintings done for a show at the gallery that I show at this past Summer. So next year, I'm hoping to have really, some...  I have no idea what the paintings are going to look like, and I'm hoping I can spend the Winter painting. 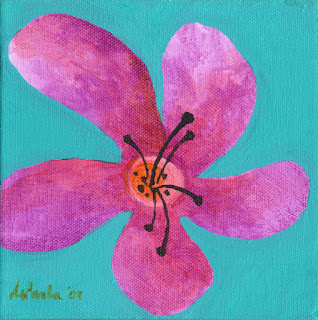 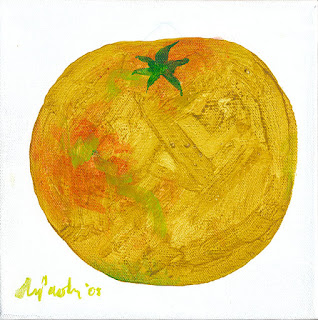 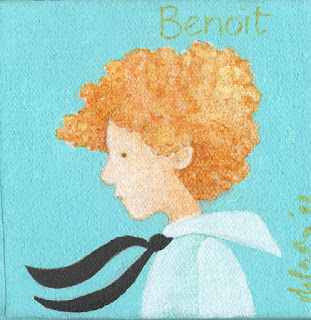 Lee:  It also seems that giving back and encouraging newer illustrators is part of what you're doing...

Tomie:  Very much so.  I was lucky enough to have wonderful mentors in my youth - at both art school and in the early years of publishing.  And I think there's nothing, nothing is more rewarding than passing that knowledge, or passing that encouragement down to younger people who I notice they might have talent or something.  I have the Tomie dePaola Award and Lin and Steve continued it.   I was going to do it for five years, which I did, and they said 'we're going to continue it.'  It will be in this coming Bulletin, and it's online.  I give an assignment, and the illustrators that want to enter the competition have to follow my guildelines, and this year it's going to be black and white.

Tomie:  The assignment is a black and white illustration from one of three classics, their choice of classics: "The Yearling," "Little Women" and "Tom Sawyer."

[Here's the link for this year's guidelines.]

Lee:  It sounds like a great opportunity for illustrators who want to break out, get noticed.

Tomie:  And also I think it gives people a chance to stretch a little bit, without being threatened. There's no book contract at the end of it.  If you win it, you win it.  I always say that I want to be surprised.  And I've been fortunate that my taste is good enough that some of the people have gone on and gotten book contracts, which is great.

It's a tough world out there now.  I'm even experiencing that.  The golden years of the children's book certainly have dimmed.  And no one knows, no one seems to know where it's going to go, which is fascinating - that the publisher themselves don't know where, what the industry is going to look like in five years.  And if they don't know, who does, you know?

Lee:  Yeah, there's so much changing.  That's a good lead-in to my final question,

Lee:  Can you share your best advice for other children's book illustrators and writers?

Tomie:  Yeah.  It's advice my twin cousins, and they're both still alive, they're in the 90s, and they became very successful fashion and editorial photographers on graduating from Pratt Institute, and I went to Pratt because they went there, and they gave me advice when I was five years old, and it was:


Lee:  I'm laughing because that came up in "The Art Lesson" which I just read with my daughter!

Tomie:  That's right!  Those are the twins!  (Laughs.)  And it's still the advice I give any young artist. 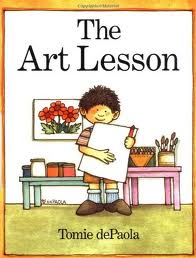 We wish Tomie good health and continued success, and cheers on his Society of Illustrators' Lifetime Achievement Award!

(You can go back and read part one and part two of our interview.)

Thanks so much Lee for sharing these interviews with Tomie. Truly inspiring to hear his views and experiences. I am a big fan and his book, The Art Lesson is one of my favorites. Merci:)

Thank you so much for this insightful and entertaining interview! My personal chuckles came from a little mentioned playful(70's?)book called The Coat. I now imagine Tomie wore a big coat and loved eating VT doughnuts like me! Wonder if Tomie believes you can write an engaging picture book story without words? Perhaps his next project will pare back to "sound and visuals" where it began?Thanks for all you've given us!