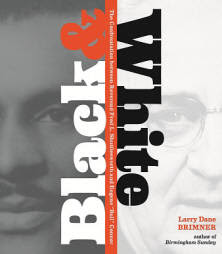 I found out more about the winning book in this interview posted at Larry's website:

Q: What was the impetus for writing this book?

A. I'm never sure if I choose a topic or if a topic chooses me. That said, however, I first encountered these two men while researching and writing Birmingham Sunday. I realized that the Birmingham movement owed its success to the Reverend Fred L. Shuttlesworth and that he had a perfect foil in the commissioner of Public Safety, Eugene "Bull" Connor. As I explained to my editor, it was a case of David versus Goliath, Good versus Evil, Reverend Fred Shuttlesworth versus Bull Connor. Little to nothing had been written about either man for young readers, yet they were critical players in the civil rights movement. I'm not certain how different history would have been had these two men not lived in the same place at the same time, but surely it would have been different.

Q: What about the conflict between these two men helped shape our world today?

A: First, you have to understand that these two men had a symbiotic relationship. Bull Connor used Fred's frequent calls for an end to segregation to get reelected to his position as commissioner of Public Safety, which put him in charge of the police and fire departments. Fred used Bull's absolute demand that the races remain apart, even after segregated buses were outlawed, to coalesce a band of followers, or foot soldiers, to protest with him. The conflict-and every good story needs conflict-between the two men eventually led to the children's crusade in which Bull called out the police department's attack dogs and ordered the fire department to turn the hoses on the young protesters. This heaped worldwide embarrassment on Birmingham, and on the United States, and it forced the Kennedy administration to call for an end to the second-class treatment of this country's black citizens. Without the conflict in Birmingham-Fred's peaceful protests and Bull's violent responses to them-it likely would have taken even longer for the country to look at the problem of race relations and equality.

Q:  You've become somewhat of an authority on the civil rights movement. What is it that you, a white man, find so appealing about it?

A:  I've been asked this question many times and some have even suggested that I should leave black history to blacks and focus on my own history, and my response has been, "This is my history, too." I want to better understand what the struggle for civil rights was all about, and there is no better way to do that than by researching and writing about it. Furthermore, as a former teacher who visits schools across the country, I've been amazed by how little is taught about the struggle. It is almost as if the entire civil rights movement can be summarized in schools by the mention of two names: Reverend Martin Luther King, Jr., and Rosa Parks. Children, and even adult groups that I speak to, don't seem to understand that the movement relied largely on unknown foot soldiers who were doing the real work of planning and protest, who were on the front lines of agitation and being attacked and getting arrested time and again.


The book sounds amazing, and there's lots more to that interview at Larry's website here.

I connected with Michelle Parker-Rock, SCBWI Arizona's Regional Advisor, to find out more about their region and Larry's win.  Here's what she shared...


Arizona was founded in 1988 and has been proudly serving the region for almost 25 years. As Regional Advisor I am honored to represent the growing number of individuals who comprise our culturally diverse membership in the pursuit of excellence. We offer a wide range of opportunities for professionally published, seasoned, and pre-published writers and illustrators who actively seek to develop their craft and stay informed about the ever-changing business of the children’s and young adult marketplace.

SCBWI Arizona is a large region geographically. Folks from Yuma to Lake Havasu City, Tombstone to the Grand Canyon, Tucson to Phoenix, Scottsdale, Prescott, Flagstaff, Sedona, Payson and places in between stay connected through our member Listserv and our Chapter Home at www.scbwi.org. In addition, our regional website, www.scbwi-az.org, provides members and the general public with information about upcoming events, networking opportunities, resources, member websites, and local speakers. The site also showcases members’ art and features portraits of local writers and illustrators in our chapter.

SCBWI Arizona is committed to providing its members with a wide variety of high quality free and tuition-based events and services throughout the year. We have hosted our members at conferences and conventions sponsored by various organizations, including the International Reading Association, the Arizona Reading Association, the Arizona Library Association, the Tucson Festival of Books, the Arizona Humanities Council, and the Arizona Book Festival, among others. In addition to our intensives, retreats, hands-on workshops, critique-niks, networking get-togethers, discussion groups and a range of other events, we bring top industry professionals to our region at our annual conference "Welcome to Our House,” This event is especially well attended and often draws folks from all over the country. At this year’s “Welcome to Our House” Conference on October 6, 2012 in Scottsdale, we will present our member Larry Dane Brimner with the well-deserved 2012 Crystal Kite Member Choice Award for his book BLACK AND WHITE: THE CONFRONTATION BETWEEN REVEREND FRED L. SHUTTLESWORTH AND EUGENE “BULL” CONNOR (Boyds Mills Press, 2011). The book was also a Robert F. Sibert Honor Book, a recipient of the 2012 National Council for the Social Studies Carter G. Woodson Book Award and a winner of the 2012 Norman A. Sugarman Biography Award.

Larry Dane Brimner has been a member of SCBWI since 1982. He is the author of more than 150 books for readers of all ages, ranging from humorous picture book fiction to middle-grade and YA nonfiction. His debut children's book was BMX FREESTYLE (Watts, 1987), a 1988 International Reading Association's Childrens Choice book. Since then, Larry’s books have continued to garner awards, including the Oppenheim Gold Medal for THE LITTLE WOLF (HarperCollins, 2002), the Norman A. Sugarman Biography Award and the Jane Addams Book Award for WE ARE ONE: THE STORY OF BAYARD RUSTIN (Calkins Creek, 2007) and an Orbis Pictus honor and a Jane Addams Honor for BIRMINGHAM SUNDAY (Calkins Creek, 2010).

For voting in the Crystal Kite Member Choice Awards, SCBWI Arizona is grouped with Nevada, Utah, Colorado and New Mexico. The nominees for this year were all outstanding. However, it was particularly gratifying to see Larry Dane Brimner win in our division. Larry is a consummate writer and an author to emulate. SCBWI Arizona is pleased to have him as one of its distinguished members and we wish him continued success.

You can find out more about Larry and his books at his website here.

My thanks to Michelle and cheers to Larry for winning the Crystal Kite Member Choice Award for BLACK & WHITE: THE CONFRONTATION BETWEEN REVEREND FRED L. SHUTTLESWORTH AND EUGENE "BULL" CONNER!