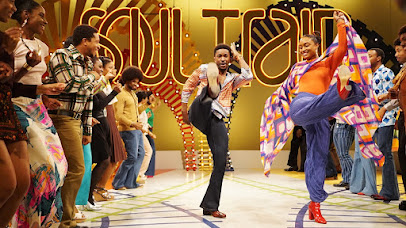 When I was a kid, I loved watching SOUL TRAIN, the African American music-dance show that beamed the coolest dance moves across television screens throughout the nation. But I was raised in a Seventh-Day Adventist home, so we were not allowed to watch TV on Saturday mornings when it aired. Occasionally, though, we got a sneak-peek during overnighters with our cousins.

Soul Train dancers wore large, proud afros and colorful bell bottom pants, that flapped gracefully around six-inch platform shoes. I took it all in, learning dances like The Watergate (the Black Hustle), The Robot, and the Bump. I was much too shy to dance along with my cousins as we watched. But later on at home in my room alone, I’d turn the funk music up loud and cut loose—dancing like no one was watching, because, well, no one was. I was free to express myself in the absence of judgmental eyes. Years later, I learned to apply the same principle to writing.

My career in children’s books began as an illustrator, uninterested in writing at all—at least, that’s what I told myself. I’m a visual artist, I thought, I need to stay in my lane. Besides, writing was for people much smarter than me. I wasn’t being honest with myself, though. Secretly, I wanted to get published as a writer, too. But I was too afraid of putting my words out into the world for other people to see. Writing buddies suggested that I get started by writing in a blog. My anxieties skyrocketed, but a blog was the right answer for me.

I had to start from scratch. In grade school, I never paid much attention to those silly, erudite English rules. I was a grammar rebel. I was proud of my ain’ts and gots. And who cared if an "I came before E, except after C?” I was an artist. Spelling was subjective—a matter of personal perspective. When I started blogging, though, I began to conform. As ignorant as I might’ve been at the time, I didn’t want my writing to sound dumb. So, I Googled: “How to structure a paragraph,” “How to use a comma?” And other things I probably should have already known.

After that, I just jumped in—dumping my thoughts into the content area that cradled my words, safely protecting them from the eyes of the world until . . . I was brave enough to hit the “publish” button. Mostly, I wrote about publishing and the day-in and day-out of being a children’s book illustrator. But eventually, I branched off and started writing about current events, religion, my aversion to dogs and spiders and popular politicians—things I’d never get away with writing about in today’s you’d-better-agree-with-me-or-else climate. Writing was liberating! I experimented with different forms of writing, too, like poetry and prose, letters, sequential graphic novel-type posts with illustrations. It was some of my most honest, authentic writing to date.

Soon, people were actually reading my words. In fact, as per my blog traffic counter, they were returning to read my blog daily by the thousands. My words made people laugh. They made people cry. Some people got so angry, they’d fire off nasty retorts in the comment box. I learned the power of words, and I absolutely loved it. I did a lot of things wrong, but I also did a lot of things right. Most important, I learned a lot about myself as a writer and my confidence grew. It was time to write less in the blog, and to spend more time pouring what I had learned into a picture book manuscript.

What followed was my first book, IT JES’ HAPPENED: WHEN BILL TRAYLOR STARTED TO DRAW, which published with Lee & Low Books in, 2012. It earned several starred reviews and awards like the Ezra Jack Keats honor for new writer. That book kicked off a successful full-time writing career, and I never looked back.

So to my illustrator friends who are considering crossing over into the lane of writing for children, too, my advice: Yes—do it! Dance like no one is watching, and then write in that same space. 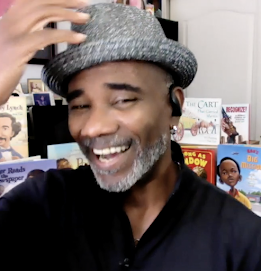 Don Tate is the award-winning author and/or illustrator of numerous picture book biographies, including PIGSKINS TO PAINTBRUSHES: THE STORY OF FOOTBALL PLAYING ARTIST EARNIE BARNES (Abrams, 2021) and SWISH! THE SLAM-DUNKING, ALLEY-OOPING, HARLEM GLOBETROTTERS (Little Brown, 2020). His WILLIAM STILL AND HIS FREEDOM STORIES: THE FATHER OF THE UNDERGROUND  RAILROAD (Peachtree, 2020) was an SCBWI Golden Kite winner in the nonfiction category. Don is a founding host of the Brown Bookshelf, a blog dedicated to advocating for Black authors and illustrators writing for children. When Don isn’t writing, illustrating or visiting elementary schools, he enjoys working out, swimming, yoga, and anything sweet and chocolaty.
Posted by Devas T. at 6:00 AM

Love this inspiration to live our full creative lives! Thank you, Don, for a wonderful month of blog posts.
Cheering you on,
Lee