"Go With Your Typos" - & A Laugh for Spring Creativity

Recently someone shared this visual joke with me: 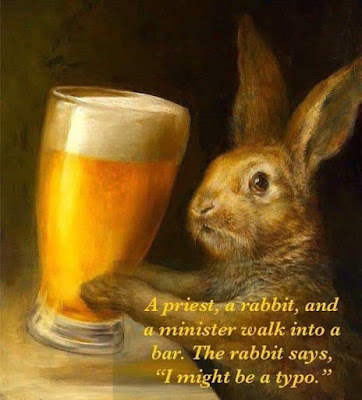 Back when I was a kid, there were a lot of jokes that started out in a similar vein. Setting aside how appropriate/inappropriate those jokes may have been, the incongruity of the "rabbit" - along with the oil painting that goes with it - just cracks me up.

It reminds me of a writing exercise my brother told me about back when he was in college. It was to "Go with your typos" - to not allow yourself to go back with the delete key, and instead if you mistyped a character name, suddenly you had another character with a similar name, or that character had a nickname.

Maybe the idea was finding unexpected humor, or just letting the story flow, or not editing yourself while you were in the composing phase of creative work, or... well, I'm not 100% sure what was the point. But in this one case, typing Rabbit instead of Rabbi led to a pretty funny joke.

The artist of the painting is Omar Rayyan. Arnold Zwicky posted back in 2020 about the anonymous addition of text to this artist's image.

I hope this made you laugh. And, maybe, you'll look at your next typo as a moment of possibility...