Telling a Story That Is Not From Your Experience: Martha Brockenbrough on Collaborating with Grace Lin on their new Picture Book "I Am an American: the Wong Kim Ark Story" 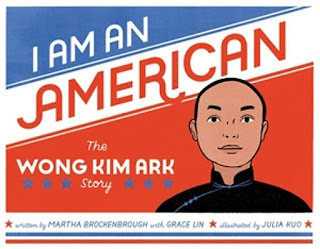 I reached out to Martha to ask about how she came to co-write this new picture book with Grace. Here's what Martha shared:

The most wonderful things can happen inside vans taking authors to book festivals. Sometimes, collaborations are launched, and this is what happened with I Am an American: the Wong Kim Ark Story.

“Who the heck is Wong Kim Ark?” you might ask.

I hadn’t heard of him until 2014, when my friend Eric Liu published a book called A Chinaman’s Chance: One Family’s Journey and the Chinese American Dream. Eric mentioned Wong Kim Ark and his role in establishing birthright citizenship for every American, and that fact stopped me in my tracks.

I knew then that it could be a picture book, if I could find a way to make it resonate emotionally with very young readers. I bought a number of books about Chinese American history and was astonished and heartbroken about the rampant racism. As I thought about it and years passed, I also started to question the rightness of me, a white person, working on this book.

So when I was sitting next to Grace on that van, Grace, who is an absolute legend in storytelling as well as being a force for quality representation on the page, I asked her if she’d heard of him. She hadn’t, so I told her the story and the research I’d done, and I offered it to her.

She countered with an offer of collaboration, for which I will eternally be in her debt. I was right to doubt my fitness to tell this story. No matter what I’d picked up from history books, government records, and newspaper accounts, I still could not find the heart of the story emotionally until Grace told it to me: the right of Wong Kim Ark to assert his Americanness.

That gave us the title and refrain for our book, and even though it is about a particular piece of history, it resonates today—in the beauty and dynamism that the children of immigrants represent as well as the ugly racism of political leaders, including the former president, who threatened to undo this Supreme Court ruling, which is more than a century old.

The right of non-white people to assert Americanness is an emotional heart that illustrator Julia Kuo grasped beautifully. Her work also celebrates the rich history and nuances of Asian identity elements. If you haven’t pored over I Dream of Popo (words by Livia Blackburne and The Sound of Silence (words by Katrina Goldsaito), then you are in for a profound pleasure.

I’m incredibly proud of this beautiful book and humbled by the grit and courage of Wong Kim Ark. I hope it moves you as much as it did me.

Learn more about Martha Brockenbrough and her books here.

Learn more about Grace Lin and her books here.