Eugene Yelchin on Writing a Memoir

Mulit-award winning author/illustrator Eugene Yelchin shares about his new middle grade memoir, The Genius Under the Table: Growing Up Behind the Iron Curtain in this Publishers Weekly profile: Four Questions for Eugene Yelchin. 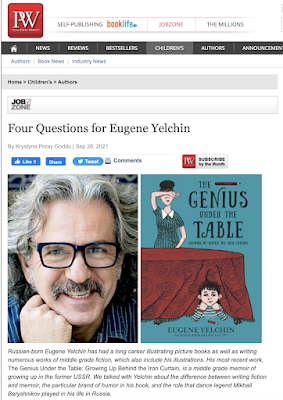 PW: How was the process of writing directly from your life different from writing fiction?

Eugene: It was easier because I knew the story before I began writing! I knew how things came out. But there was no plot, so I had to impose a plot on my memories. I had to organize real events into cause and effect to make the memoir read like a story. That’s the only way to tell a story: something happened so something else happened. My early drafts were hundreds of pages long and included everything I thought was interesting, things my brother thought were interesting, things my wife thought were interesting. But I had to leave a lot of those things out because they didn’t fit into the cause-and-effect structure.

Also, when I work on a character, I try to be extra careful not to confuse what the character wants and what the character needs. Most of us know what we want, but rarely know or understand what we need. Yevgeny wants to uncover his family’s secrets and his country’s secrets, but he’s too polite, too well-behaved to demand truthful answers. He lacks the courage to fully confront the adults in his life. Instead he attempts to piece together his small discoveries like a puzzle. Only by the end of the book does he mature enough to demand answers.

It's a fascinating interview – read it in full here.