The Movement to Dismantle the Dewey Decimal System 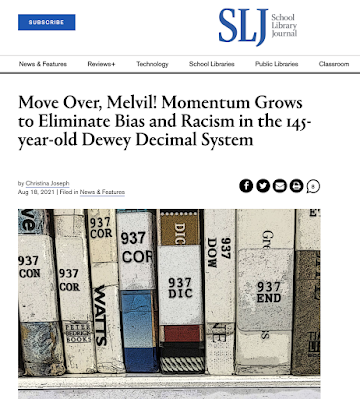 As reported recently in their article Move Over, Melvil! Momentum Grows to Eliminate Bias and Racism in the 145-year-old Dewey Decimal System by Christina Joseph over at School Library Journal,

"a growing number of school and youth librarians" are calling out the systemic bias in the, well, system.

The article explains the folks trying to change things claim that,

“Dewey’s approaches to categorizing books were racist and sexist. For instance, Black history is not part of American history; ‘women’s work’ is a separate category from jobs; non-Christian religious holidays are situated with mythology and religion; and LGBTQ+ works were once shelved under ‘perversion’ or ‘neurological disorders’ before landing in the ‘sexual orientation’ category.”

It's a fascinating article that goes into just some of the efforts being made to re-examine, and in some cases, come up with ways to, as one school librarian put it, “do better for my kiddos.”

Click here to read the full piece over at School Library Journal.