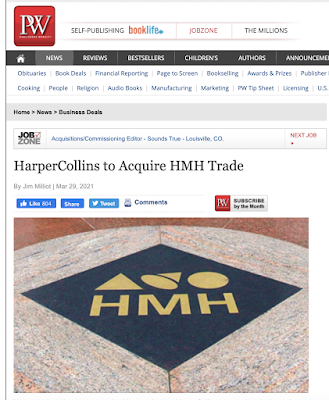 Widely reported, and quoted here from the Publishers Weekly article by Jim Milliot,

"No one in the industry was surprised last week when HarperCollins emerged as the buyer for Houghton Mifflin Harcourt Books & Media, the sixth-largest trade publisher in the U.S. Ever since HC and its parent company, News Corp, lost out to Bertelsmann’s Penguin Random House in its bid to buy Simon & Schuster last November, HC was seen as the favorite to acquire the HMH trade operation, which parent company HMH put up for sale last fall. The biggest question mark was what the purchase price would be. The answer is $349 million in cash."

The article explained that,

"The HMH purchase will keep HC firmly entrenched as the country’s second-largest trade publisher, with revenue of about $2 billion."

Back in November 2020, when Penguin Random House bought Simon & Schuster, there was a lot of noise made about how consolidation is not good news for creators.

Like this article by Alex Shephard in New Republic, Pretty Soon There'll Be Just One Big Book Publisher Left

And at that time, the Authors Guild released a statement that read, in part:

"Less competition would make it even more difficult for agents and authors to negotiate for better deals, or for the Authors Guild to help secure changes to standard publishing contracts—because authors, even best-selling authors, wouldn’t have many options, making it harder to walk away. The history of publishing consolidation has also taught us that authors are further hurt by such mergers due to editorial layoffs, canceling of contracts, a reduction in diversity among authors and ideas, a more conservative approach to risk-taking, and fewer imprints under which an author may publish. The Authors Guild calls on the Justice Department to challenge PRH’s purchase of S&S and refuse to allow even further consolidation of the U.S. book publishing industry."

This ongoing consolidation is important to know about.