Does Your Biography Have a Character Through-Line? Martha Brockenbrough Explains a Crucial Element of Writing Successful Biographies for Young People 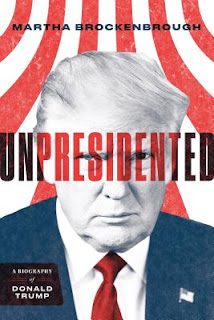 In this in-depth interview with Matthew Winner on The Children's Book Podcast, Martha Brockenbrough speaks about her latest book, Unpresidented: A Biography of Donald Trump.

In particularly fascinating section of their discussion (about 10:40 in), Martha shares something she faced when writing both this biography of Trump and Alexander Hamilton, Revolutionary.


“If I were to sum him up, what does he want? And this is something that biographers do. Who is this person and what drives them?

Alexander Hamilton, when he wrote a letter, when he was a young man, to a girl who had dumped him, he said 'I'm going to be okay, because my motto is all for love.' And I thought about that letter, and as I looked as his life, I thought, okay, was love motivating this? And indeed it was. Here's love of country. And here's him motivated by wanting to be lovable. Very much all for love was his motto, and he lived by that.

It's a great question to ask ourselves as writers when we face the challenge of telling the story of someone's life (or a portion of their life.) Who is this person and what drives them?

The entire The Children's Book Podcast interview with Martha is well-worth listening to!

You can learn more about Martha Brockenbrough. her nonfiction, and her fiction work here at her website.