How Solving a Problem with the History of Her Historical Novel Opened Up The Novel's Characters and Story: Samantha Harvey in Publishers Weekly 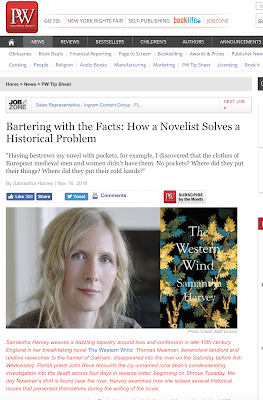 In "Bartering with the Facts: How a Novelist Solves a Historical Problem," Samantha Harvey shares what happened when research revealed that the confession box she had scoffolded her 1491-set novel around wasn't in line with the history of confession boxes in Catholic Churches in England- she was off by about fifty years.


“I decided that I could keep the confession box in my novel if I could acknowledge and explain how it was that a small, inconsequential village called Oakham—itself made up—could be the first in England to have such a thing. What conditions could make it possible, and what social, cultural, psychological, religious detail could make it plausible? In terms of novel writing, plausibility seems to me the more interesting cousin of truth. It’s where facts are arranged in such a way that they align to form a feeling of truth—a truthiness—that infuses the novel and becomes part of its internal logic.”


“Writing is a form of spellbinding. Anything amiss will break the spell—anything that seems wrong or off-key or untrue or disingenuous or, ironically if fiction, made up. (Of course, fiction is making-up by and large, but the trick is to make it seem not so at least while the reader is reading.) The spell is cast when there is a feeling of truth about what’s happening—whether that’s come about by adhering closely to facts, or by subverting, manipulating and coloring the facts. To me this isn’t a moral question about fiction’s responsibility to the truth, as some would have it, but only an aesthetic question. You do whatever you need to do to sustain the spell.”

Samantha shares two other examples of things that were "off" about the history of her book, and how in one case, she corrected it, and in the other case, she didn't—and explains why.

It's a fascinating look into the “ the strange dance between fact and fiction that we call research” and writing historical fiction.

I think it's not insignificant that this novel is not written for children, or even YA. I feel as though we who write historical fiction for young readers bear greater responsibility for historical accuracy, as our readers generally assume that, even though the story is fiction, the details of the setting and background are true.

As a Homeschooling Momma I often sought out historical fiction that was accurate into my children's reading list. If I knew that the broad strokes were on point I would overlook fictional aspects used to move the story. For instance, the confession box year is something I wouldn't blink at but keep the monarchies and daily life well researched. Just MHO