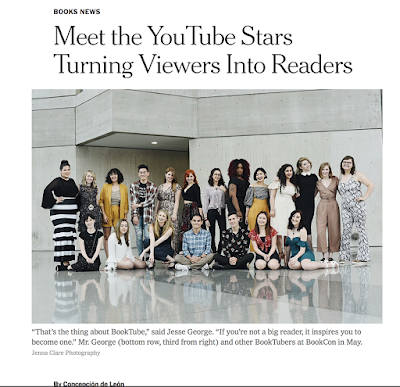 In this New York Times article, Meet the YouTube Stars Turning Viewers Into Readers, Concepción de León introduces those not in the know with some of the biggest Booktubers reaching "millennial and teenage audience."

Jesse George, whose channel is Jesse The Reader

Kat O’Keeffe, whose channel is Kaytastic

“I think for a lot of the people who are into watching BookTube videos, it feels like taking a recommendation from a friend.”


It was noticeable that the Booktubers featured in the New York Times article were predominantly White, so I did a little looking around, and found another great roundup of Booktubers by Tiffany Hall over at BookRiot that included a few people of color, notably:

Monica K. Watson, whose channel is She Might Be Monica

Who are your favorite Booktubers? Are they on your radar to reach out to about your next title?