Advice on Writing Series from Stephanie Greene (via Cynsations) 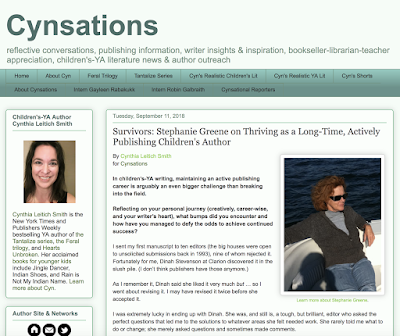 In this excellent interview at Cynthia Leitich Smith's Cynsations, Survivors: Stephanie Greene on Thriving as a Long-Time, Actively Publishing Children's Author, Cynthia asks Stephanie (the author of four series) to share some insights into writing series.

Stephanie breaks series down into character-driven, concept-driven, and hook-driven, explaining that,


There are different kinds of series, of course. If you have a character in mind who you believe will appeal to enough kids that they can successfully carry a series, develop that character to the best of your ability in the first book. Three of my series have been character-driven. I first created a character who I liked. In every case, it was my editor who asked for more. (There are countless character-driven series; read as many of them as you can, especially in the genre in which you want to write. Study them. Figure out what makes the character appealing to children.)

She cites The Magic Treehouse series by Mary Pope Osborne as a "prime example" of concept-driven series, suggesting,


If you have a concept, develop it in one book and see what happens.

The third approach, as Stephanie tells us,


...is to develop a “hook.” That’s a feature about the character that can be repeated in subsequent books. Many series employ this device. The trick is to make it an intricate part of the story and not a superficial tag-on. I inadvertently created my Princess Posey (G. Putnam's Sons, 2010-2018) series of early chapter books because I gave the character in the first story - what was meant to be a stand-alone book – a hook: Posey’s pink tutu makes her feel brave. It was my editor’s decision the tutu [hook] could carry a series.

In all instances, the focus is to create the best possible book one, knowing it might be a stand-alone, and aiming to make it as good as it can be.

It's a wide-ranging interview, well-worth reading in its entirety.

Thanks to Stephanie and Cynthia!