How Success Can Differ From Book to Book: Wisdom from Carol Hinz (via Twitter)

Carol Hinz is the Editorial Director of Millbrook Press and Carolrhoda Books at Lerner Publishing Group.  This essay (in tweets) is shared here with Carol's kind permission. 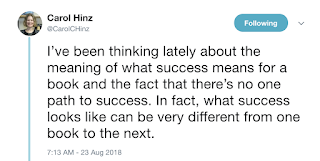 
I’ve been thinking lately about the meaning of what success means for a book and the fact that there’s no one path to success. In fact, what success looks like can be very different from one book to the next.
**
Certain books get a lot of buzz ahead of their release. And don’t get me wrong—deal announcements are fun, cover reveals are fun, and starred reviews are fun. But all the buzz in the world doesn’t automatically make a book a success.
**
Some books that are ultimately very successful don’t get a lot of buzz. Let me share a few examples…
**
I edited a book that received three starred reviews. It has sold okay.
**
Two years later, I edited a book from the same author as the book mentioned above. It received two starred reviews. It has sold twice as many copies as the previous book and is still going strong.
**
I edited a book that received one starred review and was named an honor book for an ALA award. It’s selling well.
**
I edited a book that received no starred reviews but was named to six different state award lists. It is still in print eight years after its release and has sold nicely.
**
I edited a book that received one starred review and received no recognition from any ALA committee. Three years after the book’s release, we’ve sold tens of thousands of copies and are reprinting it multiple times a year just to keep it in stock.
**
I brought a project to acquisitions years ago that wasn’t approved (much to my disappointment). It found a wonderful home with another publisher and multiple follow-up volumes have been published. I feel happy every time I see one of those books.
**
I brought a project to acquisitions that was approved, but I was outbid by another, bigger house. Yet the interactions I had with the author have opened up the possibility for us to work on a different book together.
**
Of course we all want each and every book to be a success. The key thing is to make the very best book you can with a team you trust.
**
Publishing has a lot of ups and downs—and the longer you stay in it, the more ups and downs there seem to be. Enjoy the ups when they come, and know that the downs are only temporary.
**
Keep working, keep creating, and when your book is finished, get the word out about your book in the ways that work best for you—whether it’s on social media, in a monthly e-newsletter, at bookstore events, at school visits, or all of the above.
**
And above all, know that the most meaningful success doesn’t come from accolades—it comes from the moment when a reader connects with your book. That sort of success can never be measured, but that doesn’t make it any less important.
**
Good luck to all the book makers today and every day. May you find your own path to success!

Thank you Carol. It's insight and advice that clearly resonated—hundreds of likes, dozens of comments and re-tweets, and lots of online conversation!