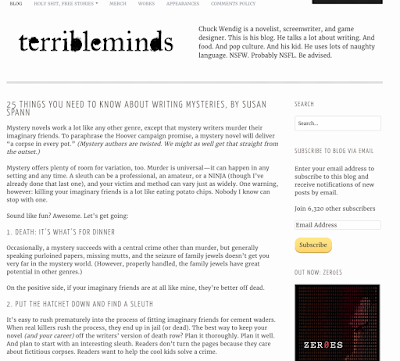 From there being three kinds of clues to how we writers have a time machine, and can go back and drop the keys where we need them, there's lots to learn (and consider) in this Susan Spann article over at Terrible Minds.

"Readers don’t turn the pages because they care about fictitious corpses. Readers want to help the cool kids solve a crime."


"THE FIRST RULE OF THE BACKSTORY IS DO NOT WRITE BACKSTORY
No, seriously. Don’t. Not directly, anyway. Backstory is the cayenne pepper of the writer’s literary spice drawer. A little, added at the proper time, enhances the novel and gives it zing. Use too much and readers dump the entire thing in the garbage bin."

"Every one of your suspects is a liar. The issue is that only one is lying about this murder. The rest don’t want the sleuth finding out they were dressing in drag, having sex with a prostitute dressed as a purple dinosaur, or fertilizing the marijuana grove at the time of the killing. Figuring out what your suspects are hiding is just as important as figuring out “who-done-it” … and sometimes, a lot more fun."