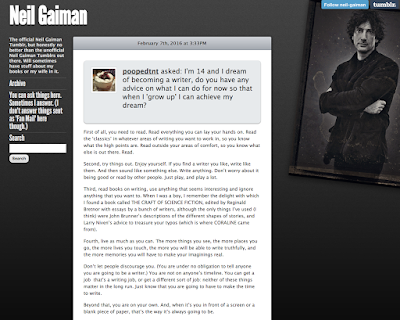 
There's lots more, as shared on Neil's Tumblr and widely reported, including in this Bustle article.

There's a fascinating answer to writing race here, which includes:

"You know who comes from where, after all, how they talk, what kind of foods they eat. But I only tend to tag the skin colour of the white characters in the book when they first show up." He gives a bunch of examples from Anansi Boys and then talks about how "race isn’t just skin-colour."

And one more highlight:


"One of the joys of fiction is problem-solving. You can wind up rooting for anybody as long as they use their brains to get out of trouble. Actually, it's a way to make an unsympathetic protagonist or even antagonist really sympathetic. Put them in a really difficult situation, and then make them figure it out. Your character is deep in trouble, don't have them fight their way out. Have them think their way out, and solve their problem by the kind of knowledge everybody ought to know--including the reader, who can then go, "Oh my gosh, I could have done that."