I need to start this post with an apology to Deborah and all of you.  I resisted checking this book out for too long, because I didn't love the self-defined idea of claiming "dummy" status by picking it up... I guess I was embarrassed. (I'm almost embarrassed to admit that!)

But really, I'm over it now. Because Deborah Halverson (who I'm always so impressed with) has put together a really useful guide, for all of us who write YA. 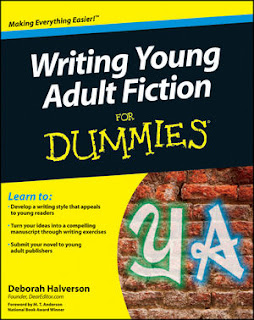 And her book is packed with good stuff. Like on page 76, where Deborah explains:

Your goal with your main character (or protagonist) is to move the plot forward and in the process transform that character into something better or wiser, thereby giving life to the story's themes. The reader, too, should be better off for having read this character's tale. To accomplish this, all protagonists, regardless of their age or the genre, have to share three attributes:

A need or want strong enough to make the hero struggle onward, no matter what obstacles frustrate his quest to achieve it: This need or want is the character's goal. In teen novels, the need/want must be something other teens can relate to. After all, shattering the glass ceiling at the office has no meaning for readers whose career arc is still in the squeezing-lemons-at-Hot-Dog-on-a-Stick phase – if they're even old enough for a work permit. Examples of teen-friendly needs/wants are parental or peer approval, salvation of other characters in physical or emotional peril, or winning a competition against other teens.
Within this need/want attribute is its opposite: the fear of failing to attain that Big Want. This is an important factor because the more undesirable you make the consequence of failure, the greater your hero's fear will be, increasing the tension in your story. Tension makes readers turn pages. I talk about raising the stakes to heighten tension in Chapter 6.

A key flaw. The protagonist's flaw is that undesirable trait he keeps tripping over as he tries to attain his goal. Another way to look at his flaw is as his vulnerability. Maybe he's afraid of heights, or painfully shy, or too self-centered. Achieving success is darned hard when you're in your own way. Hard... but not impossible, thanks to the character's core strength.

A core strength. This is the personality trait that will overcome the key flaw. The core strength must be evidenced in the character in one form or another throughout the entire story. Simply pulling it out of your hat for the climax feels contrived. Maybe your characters didn't notice this strength or it was just budding, but it was there. For example, if you want to set up a character's extreme act of compassion, the hero may rescue an abandoned animal early in the story and nurse it to health, or he may stop his bike so as not to run over an insect hobbled by a broken wing, or he may surreptitiously give a favorite toy to a needy kid he meets at the park. Small moments like these set the stage for the core strength to blossom at the end of the story.

Perhaps your hero's want is to be popular, his flaw is glory-hogging on the basketball court (earning him not admiration but further alienation), and his strength is a moving compassion for underdogs like himself. In this scenario, his compassion for someone else finally overcomes his need to set a point record when he passes the ball to a teammate with even more at stake for the game-winning basket. Both characters become school heroes, and your main character has made a key transformation. That's an example of a successful character arc, which I focus on later in this chapter.


Here's the table of contents, to give you a big-picture idea of what's covered: 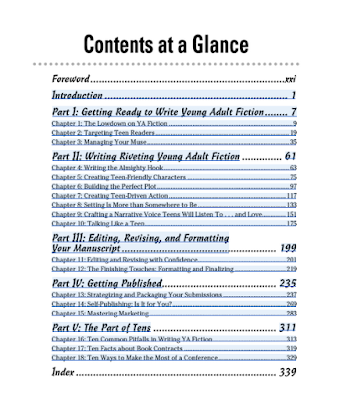 So are we dummies for wanting to write YA? Nahhh.

As M.T. Anderson says in the book's Foreword, we're the smart ones:

"If you write to stir the emotions of readers, to move people deeply, to change people's lives, then you should consider writing for young adults. Who else will read your book 12 times? Who else will try to steal a copy from the library? Who else will sleep on top of your book? Who else will make a diorama of your book with the main character played by a Styrofoam cup? Who else, in short, will invest themselves imaginatively in your world like a young person will?"


Writing YA is a great calling.

And "Writing Young Adults For Dummies," even with that title, is an excellent guide.

I'm so glad you find the book so useful, Lee. I tried hard to make it so, and hearing your reaction has made my day! I know you care about your readers and don't recommend resources to them lightly.