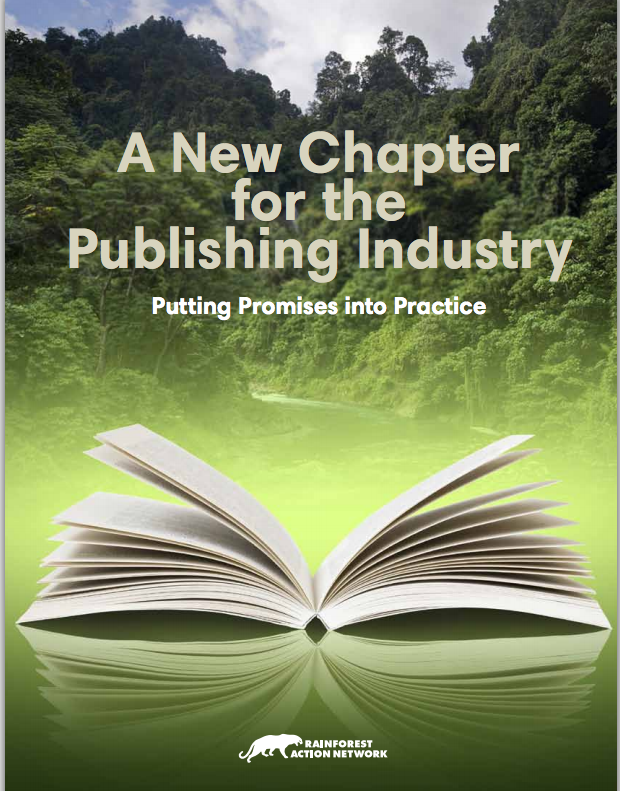 "...the world's top publishers are moving in the right direction when it comes to eliminating rainforest destruction, human rights violations, and species extinction from their supply chains."


Rainforest Action Network's May 14, 2014 report, A New Chapter for the Publishing Industry: Putting Promises Into Practice, outlines the shift in the children's publishing industry over the past four years towards a fuller view of and action on their social and environmental responsibility, and offers a set of best practices to guide companies (publishers and others) in tracing their paper supply chains and protecting forests in the process.

In 2010, Rainforest Action Network found that nine of ten top children's book publishers were using paper linked to the clearing and conversion of Indonesia's rainforests in books sold to American consumers.

In 2014, they cite Disney, Hachette, Scholastic, HarperCollins, Pearson/Penguin (prior to the merger with Random House) and Macmillan as "Leaders" and say that things are much improved.

Eight companies are now conducting independent fiber testing of their books, "to verify that no unwanted fiber is making its way into the supply chain," compared with not a single company four years ago.

Nine companies have public paper policies today, compared with five back in 2010.

The numbers are better, but there's still progress to be made.

The report also profiles major children's publishers, giving an overview of how each is doing in terms of this issue, citing strengths, opportunities and areas for improvement. The companies explored include:

And while they acknowledge that "publishers alone cannot guarantee the survival of rainforests in Indonesia, the industry has the ability to affect change and create a positive impact."


The report is a fascinating education, and is well worth checking out.