Hollywood's films for young people have three male characters for every one female character - And what we can do about it. 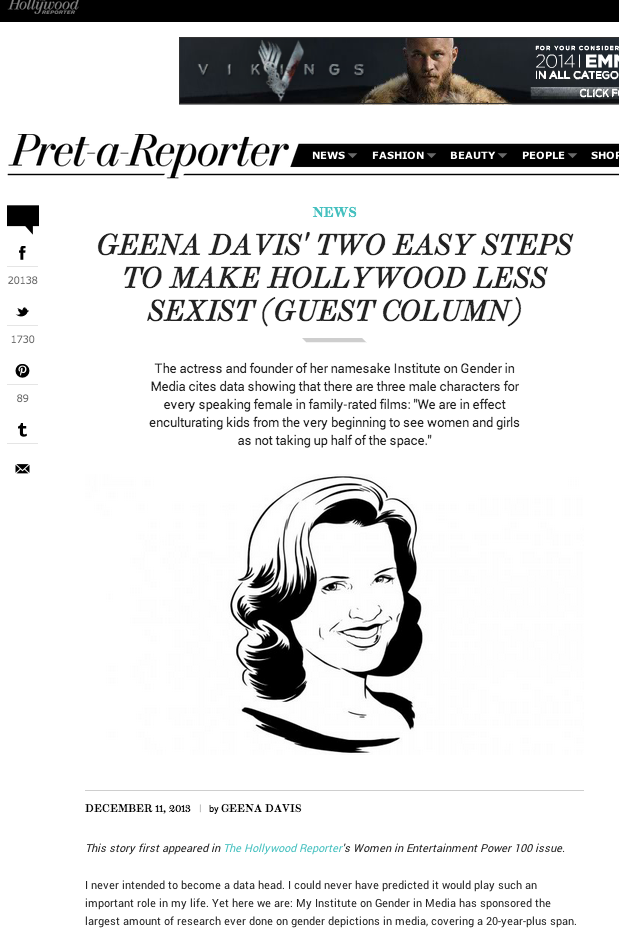 The actress and activist Geena Davis wrote in the Hollywood Reporter (Dec 2013, pg. 22) that in research conducted for her Institute on Gender in Media by Dr. Stacy Smith at the USC Annenberg School for Communication and Journalism, they found that

"...for every one female-speaking character in family-rated films (G, PG and PG-13), there are roughly three male characters; that crowd and group scenes in these films -- live action and animated -- contain only 17 percent female characters; and that the ratio of male-female characters has been exactly the same since 1946."


Consider those numbers, in contrast to the US Census bureau report that 50.8% of the population are "female persons."

Geena added to her article,

"Throw in the hypersexualization of many of the female characters that are there, even in G-rated movies, and their lack of occupations and aspirations and you get the picture."


The article is called "How to Change the Depiction of Women... in 2 Easy Steps." Step 2 is specific to the movie industry (it's that when describing a crowd scene, writers should put in the script "A Crowd gathers, which is half female." It's so the people making the movie don't default to a crowd that's 17 percent female instead.)

Her first suggested step is more universal, and it's something that all content creators, including those of us writing and illustrating for kids, can do:

"Go through the projects you're already working on and change a bunch of the characters' first names to women's names. With one stroke you've created some colorful, unstereotypical female characters that might turn out to be even more interesting now that they've had a gender switch. What if the plumber or pilot or construction foreman is a woman? What if the taxi driver or the scheming politician is a woman? What if both police officers that arrive on the scene are women - and it's not a big deal?


With all the synergy and border-crossing between movies and books and apps, Geena's point -- and advice -- is well worth considering!