"Texas has seen the future of the public library, and it looks a lot like an Apple Store." 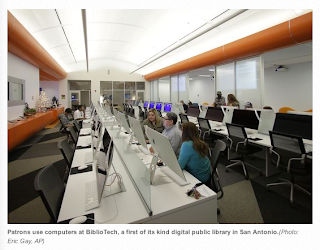 It's a fascinating read, including this:


San Antonio is the nation's seventh-largest city but ranks 60th in literacy, according to census figures. Back in the early 2000s, community leaders in Bibliotech's neighborhood of low-income apartments and thrift stores railed about not even having a nearby bookstore, said Laura Cole, BiblioTech's project coordinator. A decade later, Cole said, most families in the area still don't have Wi-Fi.

"How do you advance literacy with so few resources available?" she said.

Residents are taking advantage now. The library is on pace to surpass 100,000 visitors in its first year. Finding an open iMac among the four dozen at BiblioTech is often difficult after the nearby high school lets out, and about half of the facility's e-readers are checked out at any given time, each loaded with up to five books. One of BiblioTech's regulars is a man teaching himself Mandarin.

One interesting angle is that "The space is also more economical than traditional libraries despite the technology: BiblioTech purchases its 10,000-title digital collection for the same price as physical copies, but the county saved millions on architecture because the building's design didn't need to accommodate printed books." -- Namely, books are heavy, and buildings designed to hold thousands of them need to be able to bear that weight.

Other public library efforts to go bookless haven't succeeded in the past. Will this one?

And is this all-or-nothing approach to going digital a glimpse of the future, or a experiment that's gone too far?

What do you think?

But... you can't browse the covers or pick up that extra something that caught your eye! Books are tactile, attractive and tangible things that are a pleasure to hold. They even smell nice.
Children's books in particular are designed to be a visual pleasure, and to be able to sit with a selection all around you to pick from is part of the joy.

There is room for digital and paper books in our world... but I would hate for every library to turn into this format.

I, too, would hate to lose paper libraries. That said, a library is by nature meant to serve its local community. If a bookless library best meets the needs of this community, then that is super. And there is no downside to getting people reading, whether it's on ereaders or paper, and a great boon to the community to allow people access to the web who otherwise would not have it.

A bookless library is almost an oxymoron.I love both paper books and digital reading material including books, and also audiobooks; each format for different reasons, purposes and times. The digital library looks very stark and not very comfortable: no comfy beanbags in which to curl up. The statistics shared at the beginning of the article are frightening. If these show future improvement then the value of this type of library to the community will be demonstrated.It will be interesting to read follow-up reports.