One of the great things about attending one of SCBWI's Winter or Summer Conferences is how much you learn. And this is true no matter where you are on your journey as an illustrator and/or writer.

In a conversation I had this past weekend at #NY14SCBWI with the remarkable Jane Yolen (who has published over 350 books for children and teens!), I brought up how cool it was that the faculty at the Friday plot intensive (including her) were doing the same writing exercises as the attendees.

"Any time an artist stops learning, they're dead."


One very cool tool that was mentioned at #NY14SCBWI by Elizabeth Wein is Google Book's Ngram Viewer. 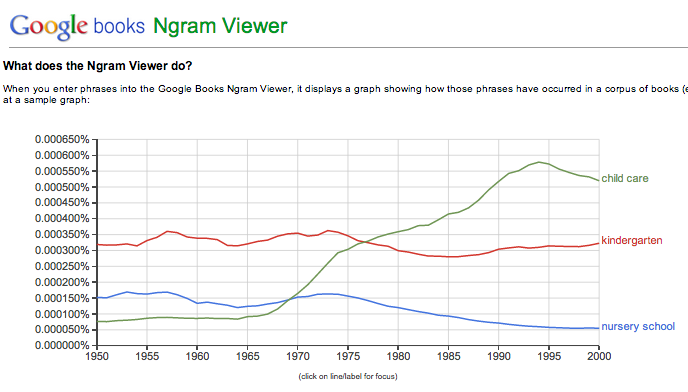 It lets you explore word and phrase usage in print from 1800 through 2008. You can find out when a word started being used, when it peaked, and even compare its usage as a noun as opposed to its usage as a verb. (Like with the word "Cook.")

The results come back as a chart, and, as in the example above, it would help you figure out that if you're writing a historical piece before 1965, a character likely would refer to "kindergarten" rather than "child care."

There's a lot of different ways to use this tool, and it's worth checking out Advanced Usage.

Thanks Elizabeth! And like Jane said, let's all keep learning!

Who knew!? Thanks for sharing.