As reported in Publishers Marketplace this week, Nielsen president Jonathan Nowell and director Jo Henry presented statistics on the commercial marketplace for children's books at the third-annual "Launch Kids" conference.

Their data was from Nielsen Bookscan (point-of-sale data from physical and online bookstores) and Bowker surveys (Nielsen bought Bowker recently) of over 6,000 book buyers and a separate survey focused on children's books of about 3,000 people. 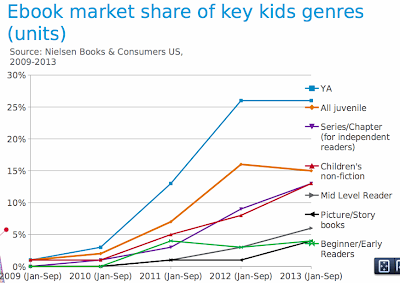 "children's books now comprise 34 percent of the print market as measured by Nielsen Bookscan -- up from 30% in 2011."


"physical stores have retained their importance as a place to purchase children's books, still accounting for 62 percent of non-YA children's book sales (in units)."


ebooks comprised "about 15 percent of all children's sales over the past two years."


Nielsen found a sharp increase recently in what Henry called "pester power," as kids increasingly are finding and asking for the books they want to read. (This category ranked well above all other "discovery" factors.)


and maybe most shocking,

the number of teens who say they do not read for fun increased sharply in 2013. In quarterly 2012 surveys that number was around 20 percent, but in spring 2013 it was 30 percent and in fall 2013 it jumped to 41 percent. "I can correlate this research with similar work we did in the UK," Nowell said. "I find this the most astonishing statistic; if it was not true in both territories, I would question it."