The Five Finalists for the 2013 National Book Award for Young People's Literature Are...

Here are the finalists and their book blurbs: 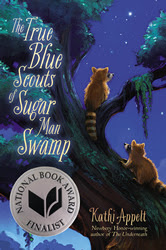 Raccoon brothers Bingo and J’miah are the newest recruits of the Official Sugar Man Swamp Scouts. The opportunity to serve the Sugar Man—the massive creature who delights in delicious sugar cane and magnanimously rules over the swamp—is an honor, and also a big responsibility, since the rest of the swamp critters rely heavily on the intel of these hardworking Scouts.

Twelve-year-old Chap Brayburn is not a member of any such organization. But he loves the swamp something fierce, and he’ll do anything to help protect it.

And help is surely needed, because world-class alligator wrestler Jaeger Stitch wants to turn Sugar Man swamp into an Alligator World Wrestling Arena and Theme Park, and the troubles don’t end there. There is also a gang of wild feral hogs on the march, headed straight toward them all.

The Scouts are ready. All they have to do is wake up the Sugar Man. Problem is, no one’s been able to wake that fellow up in a decade or four… 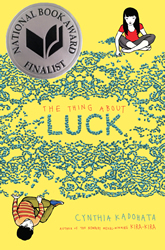 Cynthia Kadohata for “The Thing About Luck” (Atheneum)


Summer knows that kouun means “good luck” in Japanese, and this year her family has none of it. Just when she thinks nothing else can possibly go wrong, an emergency whisks her parents away to Japan—right before harvest season. Summer and her little brother, Jaz, are left in the care of their grandparents, who come out of retirement in order to harvest wheat and help pay the bills.

The thing about Obaachan and Jiichan is that they are old-fashioned and demanding, and between helping Obaachan cook for the workers, covering for her when her back pain worsens, and worrying about her lonely little brother, Summer just barely has time to notice the attentions of their boss’s cute son. But notice she does, and what begins as a welcome distraction from the hard work soon turns into a mess of its own.

Having thoroughly disappointed her grandmother, Summer figures the bad luck must be finished—but then it gets worse. And when that happens, Summer has to figure out how to change it herself, even if it means further displeasing Obaachan. Because it might be the only way to save her family. 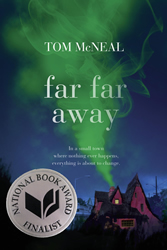 Jeremy Johnson Johnson’s life has begun to feel like a cruel fairy tale. He hears voices – “strange whisperings” – so the citizens of the small town of Never Better treat him like an oddity and an outcast. Meanwhile, his mother takes a bite of a cake so delicious it’s rumored to be bewitched and runs away with another man. Jeremy’s heartsick father goes into his room and stays there unhappily ever after. Then the town’s coltish, copper-haired beauty takes a bite of the cake herself and falls in love with the first person she sees: Jeremy. In any other place, this would be a turn for the better for Jeremy, but not in Never Better, where the Finder of Occasions—whose identity and evil intentions nobody knows—is watching and waiting, waiting and watching. . . 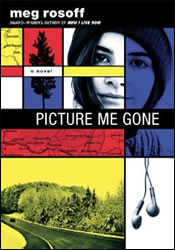 Mila has an exceptional talent for reading a room—sensing hidden facts and unspoken emotions from clues that others overlook. So when her father’s best friend, Matthew, goes missing from his upstate New York home, Mila and her beloved father travel from London to find him. She collects information about Matthew from his belongings, from his wife and baby, from the dog he left behind and from the ghosts of his past—slowly piecing together the story everyone else has missed. But just when she’s closest to solving the mystery, a shocking betrayal calls into question her trust in the one person she thought she could read best. 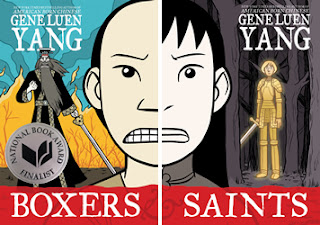 In two volumes, Boxers & Saints tells two parallel stories. The first is of Little Bao, a Chinese peasant boy whose village is abused and plundered by Westerners claiming the role of missionaries. Little Bao, inspired by visions of the Chinese gods, joins a violent uprising against the Western interlopers. Against all odds, their grass-roots rebellion is successful.

But in the second volume, Yang lays out the opposite side of the conflict. A girl whose village has no place for her is taken in by Christian missionaries and finds, for the first time, a home with them. As the Boxer Rebellion gains momentum, Vibiana must decide whether to abandon her Christian friends or to commit herself fully to Christianity.

The winner will be announced in a ceremony in New York City on November 20, 2013.

It's cool to note that his year there were five additional titles that made it onto the National Book Awards for Young People's Literature "long list" of heralded books:

Lisa Graff, A Tangle of Knots (Philomel, A division of Penguin Group USA)

We all have some wonderful reading ahead of us!